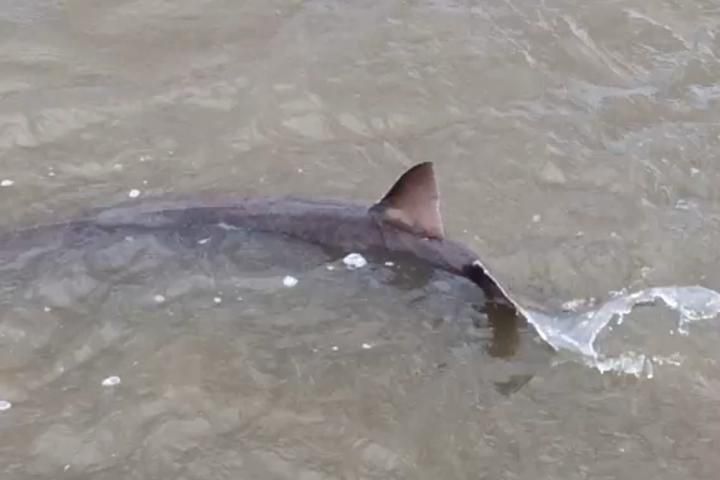 COLUMBIA - The Missouri Department of Conservation is celebrating recent video that shows lake sturgeon spawning in the wild.

Research Center Chief Vince Travnichek said the department has been trying to reintroduce lake sturgeon into the Missouri and Mississippi rivers for almost 30 years.

"We'd been hoping this would occur," Travnichek said. "This is part of our restoration efforts in hoping to get enough individuals out there to actually have them successfully reproduce in the wild and start to have a self-sustaining population."

Lake sturgeon have been around for 150 million years, outliving dinosaurs. The prehistoric fish can grow up to 8 feet and weigh up to 300 pounds. While lake sturgeon can live more than 100 years, it takes them 20-30 years to reach sexual maturity, and the females have a very slow reproduction rate. This leaves the fish more vulnerable to endangerment and extinction.

"The lake sturgeon, its demise was probably related to over-harvest 100 years ago," Travnichek said. "The species was used for flesh, they took them to New York, smoked them and people ate them. They also produced caviar."

Lake sturgeon are state endangered, meaning they're only endangered in Missouri and not throughout the whole country. In 1974, MDC declared lake sturgeon endangered and banned their harvest. In 1984, the department started raising the fish in captivity and releasing them into the wild, a practice it still continues today.

Travnichek said MDC gets fertilized lake sturgeon eggs from a U.S. Fish and Wildlife Service hatchery in Wisconsin, and then hatches the eggs and raises the fingerlings in a hatchery near Sweet Springs.

In late April, angler Sam Hardy took video of what appeared to be lake sturgeon spawning in the Mississippi River near St. Louis, and MDC confirmed it was the ancient fish reproducing naturally.

"When I saw that video, I actually went, ‘Wow, that's unbelievable,'" Travnichek said.

Even though MDC has confirmed lake sturgeon are spawning, Travnichek said the department won't stop stocking the fish for at least another decade.

"We will have to continue stocking them for a while," Travnichek said. "Just because we saw those individuals, what appeared to be in reproductive or spawning activity, doesn't mean those eggs will develop."