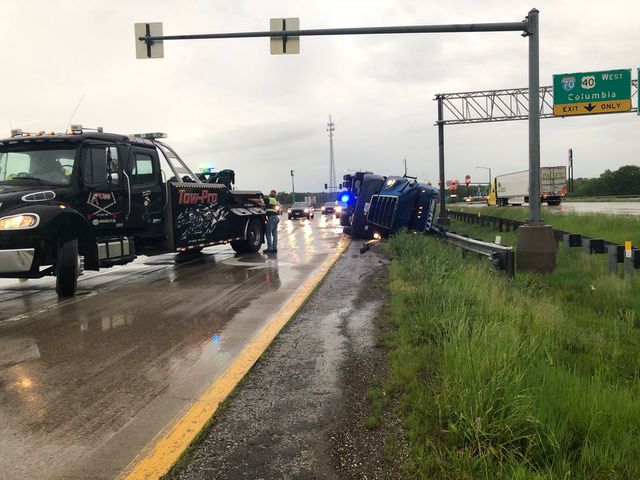 KINGDOM CITY - High winds blew a tractor-trailer off the road at the intersection of Highway 54 and I-70 Saturday evening.

KOMU 8 News confirmed a tractor-trailer carrying department store merchandise was crossing the Highway 54 overpass over I-70 when it was knocked on its side around 6 p.m.

A KOMU 8 reporter on scene said the vehicle was marked as being operated by Riverside Transportation Incorporated.

A video from the Missouri State Highway Patrol shows the truck being blown over before landing in a grassy median off the surface of the road.

KOMU 8’s reporter saw a tow truck attempting to remove the truck from the scene around 7:15 p.m.

The condition of the driver is currently unknown.

Take a look at this footsge of the tractor trailer flipping on its side. This happened near the intersection of I-70 and Highway 54 in Kingdom City. Video courtesy of @MSHPTrooperF pic.twitter.com/Vm9fePc7l1

A tractor trailer was blown over here near the intersection of I-70 and Highway 54 in Kingdom City. Missouri State Highway Patrol is on the scene. @KOMUnews pic.twitter.com/uAUeUZK8RN

The tow truck is now trying to clear the vehicle. @KOMUnews pic.twitter.com/IgzihZPNmx

A second tow truck is now trying to flip the trailer back upright. @KOMUnews pic.twitter.com/vwWGSnlLju