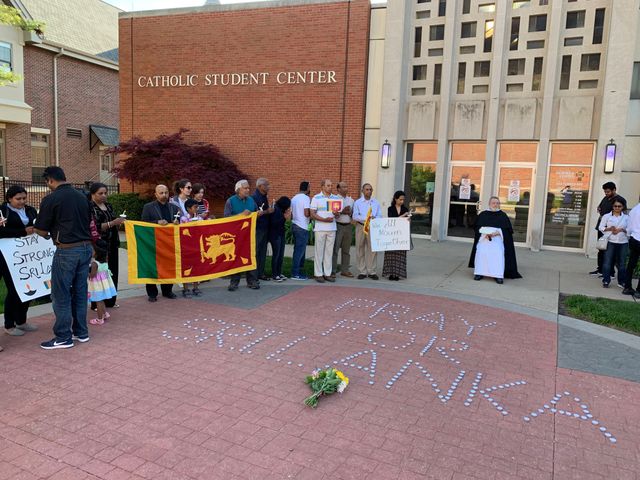 COLUMBIA - Dozens of people gathered Friday to remember the lives lost in the Easter Sunday bombings in Sri Lanka.

"God, goodness, love, peace, those things are going to outshine the hatred and the discord and the violence," priest Rich Litzau said.

Dozens of people attended the event, where attendees held signs with messages such as "We all mourn together" and "Stay strong Sri Lanka." There were Sri Lankan flags available to hold as well as candles.

While such a tragedy might cause some people to turn to anger and resentment, Litzau said it's time to turn to hope.

"Belief, not a truth, that for every bad thing that happens that makes it to the news there are a dozen things that happen that are grace filled, loving, and about peace," he said.

People of all religions were invited to attend. After a few words from Litzau, those gathered held a moment of silence for the victims. It drew on for 15 minutes.

Litzau said vigils like this help the community come together.

"I think in a situation like this, where people are hurting, they have an opportunity to realize they're not alone," he said. "Sometimes knowing that you're not alone can be a step, or moving into a different space."

NBC News reported an extremist group targeted churches and hotels across the island nation with suicide bombers on Easter Sunday. Approximately 250 people were killed in the attacks; more than 500 others were hurt.