Volunteer firefighter back at his station after severe head injury 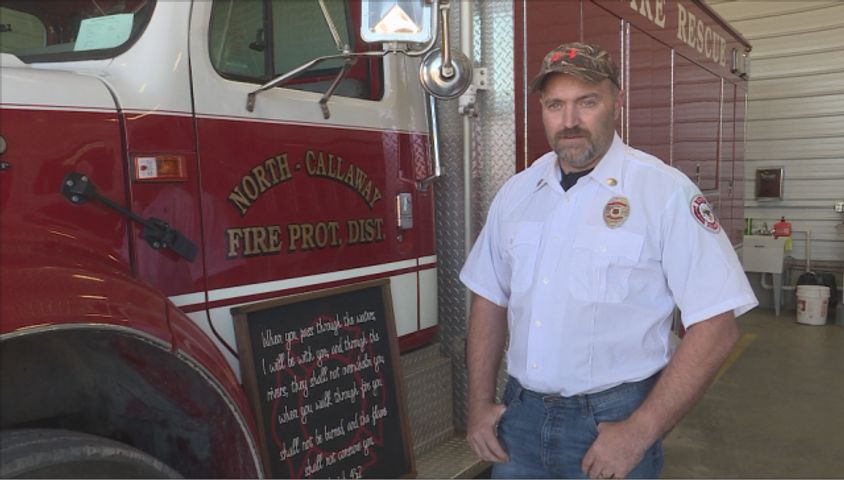 CALLAWAY COUNTY - After months of rehab work, volunteer firefighter Tim Hays is back at the North Callaway Fire Protection District station where he has worked for about two years.

"I do it to help people out that need help out through a bad situation in their time," he said. "Just like that, I got the help from my own firefighters it was a huge, huge blessing to me."

Last year, on October 5, Hays' station responded to a call from a farm where a tree had caught on fire after it was hit by lighting. The farmer asked firefighters to cut down the tree because hot ashes were falling on a cornfield, catching crops on fire.

Hays was not on duty when the call came. He was out running errands but decided to stop by the scene to help out.

When he got there, his best friend had been working on the tree for a while, so Hays took over.

His wife, Lisa Hays, said it was the fire chief's husband who called to let her know about the accident.

"I just couldn't believe this was happening to my husband because he's a very strong-willed person, he's very confident and courageous, and he cuts trees for a living," she said.

Tim Hays was airlifted to University Hospital. MU Health Care Neurosurgeon Dr. N. Scott Litofsky said he had a fracture on his skull and a blood clot and bruises on his brain, which caused brain pressure to go up.

Tim Hays also suffered second-degree burns on his right hip and buttock and had lung injuries.

During surgery, doctors removed the blood clot from Tim Hays' brain then decided to put him in a medical coma.

"Over the course of the next several days, he continued to have problems with pressure in the brain and there wasn't really anything else that we could do from a surgery perspective," Litofsky said.

Nurse James ONeal said, because of Tim Hays critical condition, the medical team had to prepare his wife for the worst outcome.

"Because he was so sick, we were worried about him passing away, or having problems, or having severe brain damage," ONeal said.

Despite the severity of Tim Hays' injuries, his wife said she found comfort in prayer.

On October 29, the couple flew to Colorado for a two-month rehabilitation process.

He said he was "totally lost."

"It took me a while with my wife talking with me, telling me, reminding me what was going on," he said.

Lisa Hays said a speech therapist in Colorado helped her husband recover from the accident.

"She got him eating and talking and we're like, 'he's talking? He won't talk to us, we haven't heard him say anything' and she said, 'he's whispering, he's saying words' and we're like, 'wow, we want to hear it,'" she said.

On December 20, the couple moved to Omaha where Tim Hays received one-on-one sessions to help him get back to his lifestyle before the accident.

Tim Hays said his wife stayed next to him almost 100% of the time. One of the times she had to leave him was to go to her sister's funeral.

"That was first time I had ever left him. It was hard. It was hard leaving him because I knew he needed that support, he needed friends and family," she said.

Lisa Hays said it was also difficult to leave her husband at the clinic for stretches of time because health care workers there preferred to have one-on-one sessions with him.

"To me, it was coming full circle because we were coming home from this adventure that we never thought we would be on," Lisa Hays said. "You always think it's going to happen to somebody else until it hits home."

When Tim Hays got back to town, firefighters, deputies, and EMS were lined up to welcome him.

"We all went down through Kingdom City with the lights and sirens on, and EMS came on welcoming him home, calling his number, 216, saying he was back in service," Lisa Hays said. "And it was just very emotional, it was just, it was awesome, it was amazing."

Although he is back at the fire station, Tim Hays is not yet ready to fight fires or drive fire trucks again.

"The waiting part is what I hate, I did not like waiting in school and I don't like waiting now," he said. "I like to, whenever I've got my mind set on doing something, that's what I do and that's how I've recovered so fast, it's being in a positive thinking attitude."

Fire Chief Lana Karhoff, who is also a nurse, said Tim Hays' personality is what has helped him to recover from his injuries.

"Many people go through head injuries and traumatic things in their life and Tim's ability to just overcome things, they gave him the tools to work with, but his own personal ability to overcome things is what truly made him survive," she said.

For now, Tim Hays comes to the station to help train firefighters, and even just to be around those whom he called family.

He said he monitors dispatch calls from his phone and portable radios in his car, even though his chief has not cleared him to respond to any of those calls.

"I'd like to know who's going to it and if they're not highly qualified to do what the job requires, then I think about wanting to go and pop in just to check on them to make sure they're there their okay and doing stuff right," he said.

Karhoff said all firefighters under her command at the North Callaway Fire Protection District are volunteers. She said, in almost 40 years of service, the station had not reported any accident as severe as Tim Hays'.

"You always, you wait for that shoe to drop, you know that with the job that we do that that's certainly a possibility, and the shoe finally dropped," she said.

Looking back at his accident, Tim Hays said he's glad he showed up to help control that fire in October.

"I was very fortunate that I did because it could have been my best friend and the situation, it could have killed anyone of us," he said.

His doctors and nurses said Tim Hays' recovery process brings reassurance to the medical team that treated him.

"It kind of gives you that drive, that motivation for the nursing staff and the doctors to say, we did a good job, you know, this is the fruits of our labor, it kind of gives us that drive to keep pushing forward," ONeal said.

Despite the accident, Lisa Hays said she supports her husband's desire to continue to work as a volunteer firefighter.

"The reason we can do it with a smile and hold our heads up is because he's a walking miracle," she said. "We could've had a totally different story but we didn't, I mean we're all okay, we're or fine, we're doing really good."