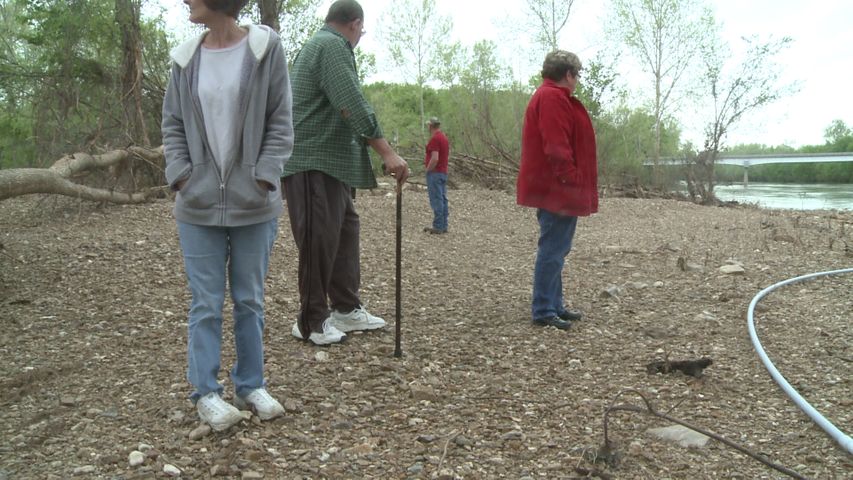 OSAGE COUNTY - As the flood level lowers along the Gasconade River, volunteers began bulldozing debris off the Route 89 Campground Monday. According to the Osage County Emergency Management Agency, the river level dropped to 9.75 feet from nearly 28 at its peak last week.

The popular holiday spot for Osage camp goers is now almost unrecognizable. The once-level grassy yard has turned to a muddy knoll. Scrap metal and exposed wires litter the ground. Dozens of trees have fallen, many ended up yards away from where they were. Even the road through the campground has been washed away. But volunteers from Linn have begun to clean up the debris.

Shannon Nelson has been monitoring the water level every day since it began flooding the campground. He has been bulldozing debris, and is organizing other volunteers.

"This is our summer life down here, so we're just trying to get ready for the summer," Nelson said.

He first leased his lot at the campground in 2008, the same year as when the last flood hit, which was slightly larger and caused even more damage, destroying pavilions and demolishing the campsite.

Susan Sellers is from Owensville, and her friends have leased a lot at the campground since last year. She first saw the aftermath of the flood today and says she can hardly recognize the campsite.

"I was devastated," Sellers said. "I have been through floods before, but I never seen the outcome like this."