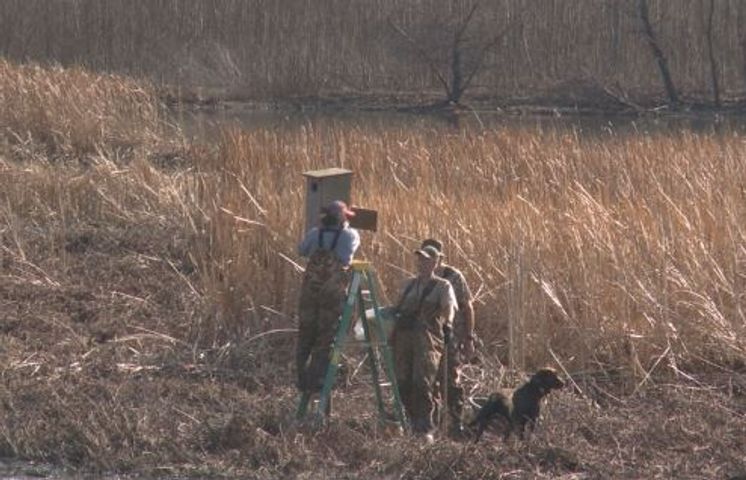 COLUMBIA — Duck season is over for the Missouri hunter, but just because it's over doesn't mean there aren't still plenty of things to do. A group of volunteers and wildlife experts headed to Eagle Bluffs Conservation Area to make sure Wood Ducks have a place to fly home.

"The way I look at it, if you take care of them they'll take care of you," said Gene Buffon, a Clark resident. Buffon has lived in the Boone County area all his life and learned to duck hunt when he was just five years old. More than sixty years later and it's not duck hunting season, but he still came to Eagle Bluffs.

Each year the Missouri Department of Conservation asks volunteers like Buffon to help clean, repair and refresh Wood Duck nesting boxes throughout the area. Twenty volunteers turned out to help the MDC refurbish 140 nesting boxes.

"It is a huge time saver for the Conservation department and really helps our staff out," Clayton Light, a MDC wildlife biologist, said. "We wouldn't be able to do it without them."

Wood Ducks are not like other waterfowl species. They nest in trees or in make-shift wood boxes mounted on poles or near water.

"There was a huge decline in snag trees because of all the farming that's been going on," Light said. "What we do with these wood boxes is mimic the tree cavity that they would typically nest in."

The efforts increase the Wood Duck population for hunters and wildlife lovers. Light said in addition to cleaning out the boxes, the volunteers collect data about what they see.

"I keep that year-to-year so I know which box was productive or which pool is more productive so I can adapt my management patterns."

Buffon said he can see the difference. Each year they add more boxes and record more ducks.

"I'm a wildlife lover and I'll hunt anything I'm allowed to but if you don't do stuff like this there wouldn't be anything left to hunt," Buffon said.

Light said he thinks the day was a success and the Wood Ducks will be very happy when they return.