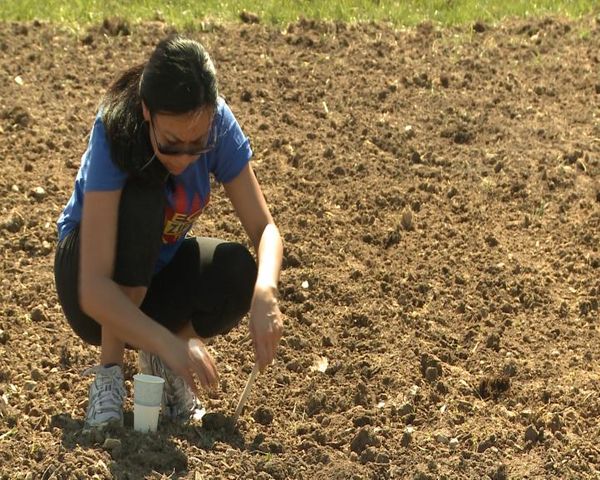 The field is named "Stormy's Meadow and Native Wildflower Field" and will serve as a stormwater demonstration site for Columbia.

"When it came time to name them, we thought it'd be a great idea, and we contacted the Britt Family [and asked] if we called fire house number seven 'Stormy Meadows,'" Columbia Stormwater Educator Mike Heimos said. "That's what it will be named from this time forward. It will be a great demonstration site that people can come to and be educated at, and hopefully someday [Stormy] will come and see it, too."

When completed, the demonstration site at station seven will consist of a shed that will collect rain water, a solar pump, a 600-gallon rain tank and a garden with five different varieties of sunflowers.

Saturday's volunteers worked to rake and level soil, plant sunflower seeds, water the field and protect it with straw. A scarecrow was also made to place in the field.

Stormwater demonstration sites are set up around the community to help educate residents about things they can do around their homes to help with stormwater.

Heimos said he hopes the station seven site will be finished by the end of the week.

Volunteers with the Columbia Stormwater Utility Program will begin working on a community garden and stormwater demonstration site at Fire Station Eight. The site at station eight will be called "Britt Community Garden."

"We will work with local people within the community, especially in that neighborhood and at the fire house over at eight to plant a community garden," Heimos said.

To volunteer with the Columbia Stormwater Utility Program visit its website.