W.A.T.C.H. reveals its 2018 nominees for the 10 worst toys this holiday season 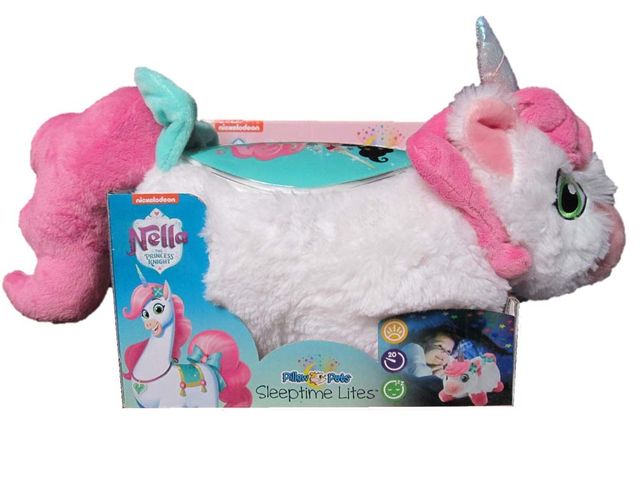 W.A.T.C.H. says these soft, plush “Pillow Pets Sleeptime Lites” project colorful night-sky images to make “night-time fun.” The package cautions that the product is “not intended” for use in a crib. Additionally, the manufacturer identifies a “battery acid leakage” hazard. 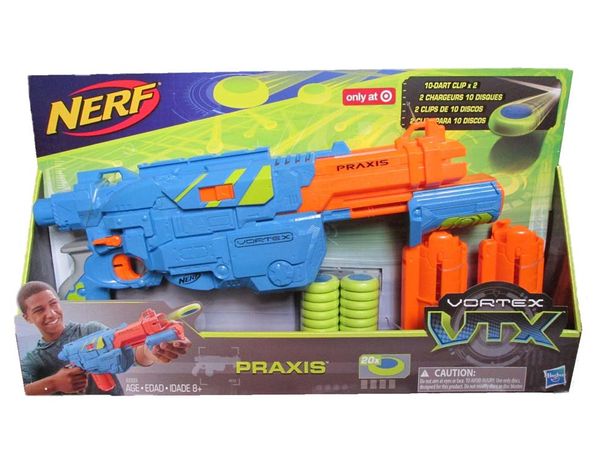 W.A.T.C.H. says the launch-force of the discs presents the potential for eye and facial injuries. 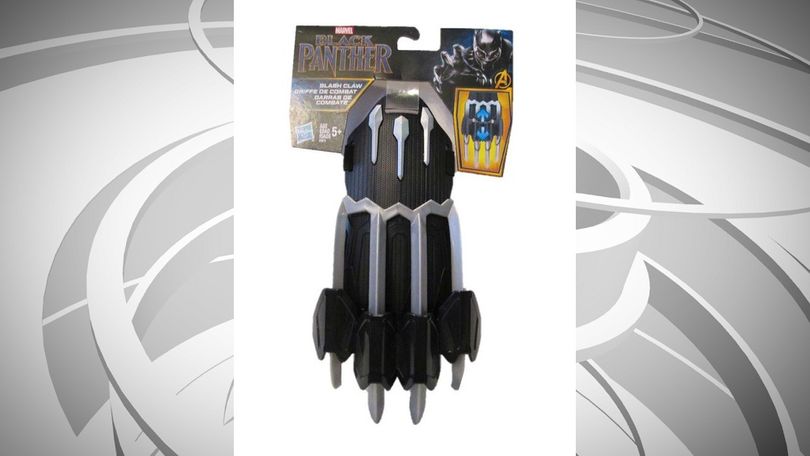 W.A.T.C.H. says these rigid, plastic claws, based on a popular comic book and movie character, are sold to five-year-olds to “slash” like the Black Panther, while simultaneously advising not to “hit or swing at people.”

W.A.T.C.H. says young children are encouraged to “power up” with this “Super Ninja Steel” spring-loaded plastic blade, with the potential to cause facial and other impact injuries. 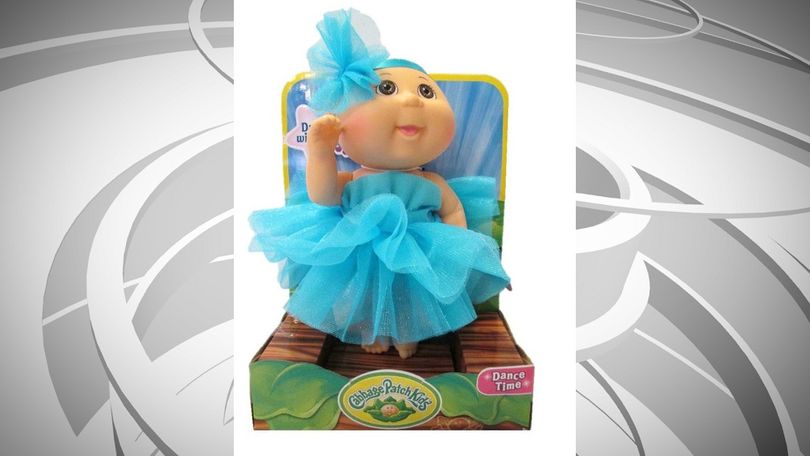 W.A.T.C.H. says even though the dolls are marketed for oral-age children, they are sold with a “removable” headband, which can be ingested. 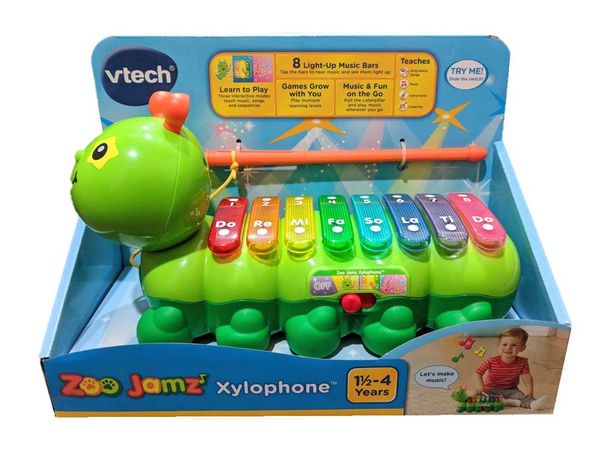 W.A.T.C.H. says the manufacturer of this toy provides no warnings regarding the slender, rigid, approximately 9-inch-long drumstick handle, which can potentially be mouthed and occlude a child’s airway. 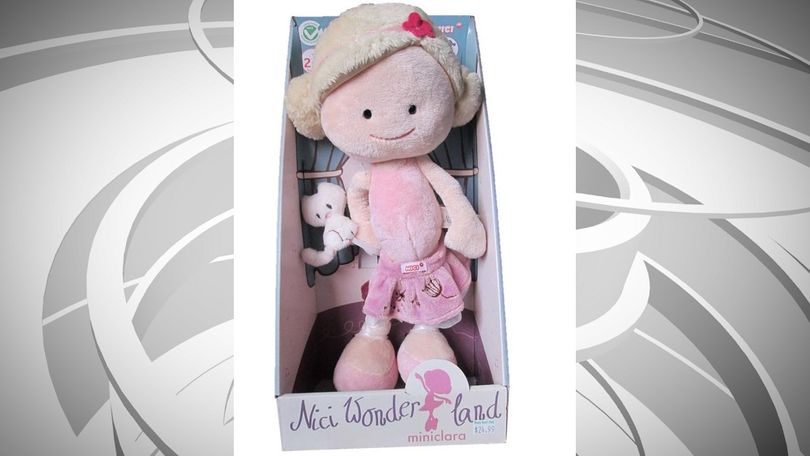 W.A.T.C.H. says the soft, plush kitten that comes with this doll can detach, posing the potential for choking if ingested. 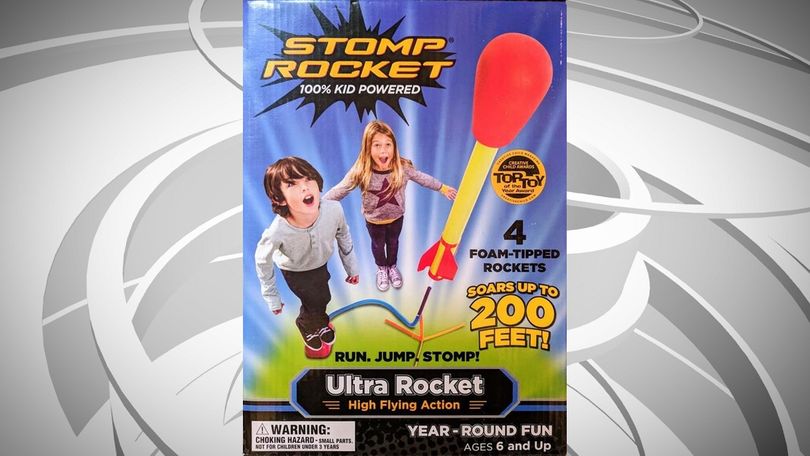 W.A.T.C.H. says 6-year-old children are advised to “Run. Jump. Stomp!” in order to launch a rocket “up to 200 FEET!” Many warnings appear on the package and package inset, in an effort to “prevent serious eye or face injuries.…” 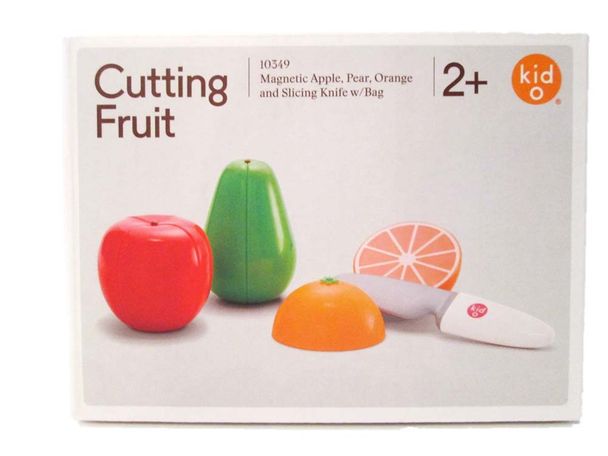 W.A.T.C.H. says the magnetic apple, pear and orange are sold with a “slicing knife” made of hard plastic. The knife can potentially cause puncture wounds and other blunt trauma injuries. 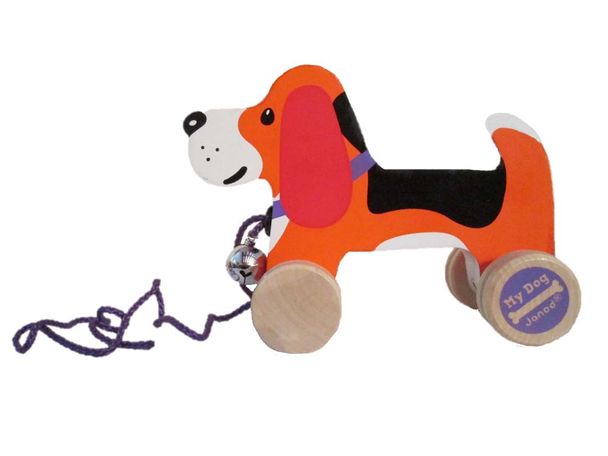 W.A.T.C.H. says despite the industry’s standard requiring strings on playpen and crib toys to be less than 12 inches in length, manufacturers are still permitted to market “pull toys” such as “Pull Along Dog” with a cord measuring approximately 19 inches. No warnings are provided.

BOSTON (AP) - World Against Toys Causing Harm, Inc. (W.A.T.C.H.) today revealed its nominees for the “10 Worst Toys of 2018” and demonstrated why toys like the “Power Rangers Super Ninja Steel Superstar Blade” and “Marvel Black Panther Slash Claw,” should not be in the hands of children. This year’s toy report addresses the types of toy hazards available online and in retail stores so parents know what deadly traps to avoid when buying toys.

At this year’s press conference at Franciscan Children’s in Boston, Consumer Advocates Joan Siff, President of W.A.T.C.H., and James Swartz, Director of W.A.T.C.H. and a nationally known trial attorney, illustrated some of the classic safety hazards that continue to re-appear year after year. These traps include poorly designed toys and inconsistent and inadequate warnings, cautions and age recommendations. Swartz and Siff also provided up-to-date information about toy recalls and stressed the necessity for more stringent oversight of the toy industry.

For over four decades, W.A.T.C.H. has tackled the issue of dangerous toys in the hope of bringing about change and reducing injuries to children. Nonetheless, dangerous toys remain on store shelves, in catalogues, and on e-retailers’ websites. Shockingly, classic toy dangers, such as small parts, strings, projectiles, toxic substances, rigid materials, and inaccurate warnings and labels, continue to be manufactured by the toy industry in newly designed packaging.

Injuries & Deaths: According to the latest statistics from the Consumer Product Safety Commission (CPSC), there were an estimated 240,000 toy-related injuries in the U.S. in 2016, and a reported 35 children died from toy-related incidents from 2014 to 2016, .i Between 1990 and 2011, there was a 40% increase in toy-related injuries.ii One child is treated in a U.S. emergency room every three minutes for a toy-related injury. iii

Toy Recalls: Recent toy recalls are a further reminder that not all toys are safe. The recurrence of many known hazards in toys in the past year is clearly suggestive of a broken system that needs fixing before more children are harmed. The CPSC, in the most current compiled data, reports there were 28 toy recalls in fiscal year 2017. In the recent 22-month period between January 2017 and October 2018, an estimated 3.5 million units of toys were recalled in the U.S. and Canada. Recalls were issued for toy defects including choking, mechanical hazards and fire hazards that could injure children. Recalls are important safety measures, but they are reactive not proactive. Many consumers never receive notice of toy recalls. Once these toys are on the market, they can reappear for resale online or in a child’s toy box. In addition, not all unsafe toys are necessarily recalled; enforcement agencies, such as the CPSC, may have limited resources to police such a large industry, existing standards may be inadequate, and regulations may lag behind new technology (exploding lithium batteries in hoverboards come to mind­­–a hazard previously addressed by W.A.T.C.H.).

Dangers of Online Purchases: With online sales expected to surge 17 to 22 percent this 2018 holiday seasoniv, parents face the disadvantage of not being able to touch and physically inspect a toy and its packaging for warning signs of obvious hazards at the time of purchase. Also, consumer-to-consumer (i.e. “second-hand”) online sales provide additional opportunities for the purchase of recalled toys and toys with proven defects.

Hidden Choking Hazards: Consumers may expect that there are sufficient checks and balances in place to prevent dangerous toys from reaching store shelves or e-commerce sites, but unfortunately this is not always the case. Even toys that pass existing safety standards can be dangerous. Toys with small parts are one of the many hazards that continue to unnecessarily put children at risk. Small parts that could detach during play or long pieces that could be mouthed and occlude a child’s airway are examples of less obvious hazards. On the 2018 “Worst Toys” list, both the Zoo Jamz Xylophone and the Nici Wonderland Dollhave parts that could be potential choking hazards for young children. So far, this year alone, there have been 8 toys recalled due to choking hazards, representing nearly 400,000 units of toys in the U.S. and Canada. Considering choking is one of the most significant contributors to toy-related injuries and deaths, this is unacceptable.

First Line of Defense– Safe Design and Manufacture: Many toy-related injuries and deaths could have been prevented with better-designed, manufactured and marketed toys. In a toy industry generating approximately $26 billion dollars in sales annually across the nation, safety concerns must be a priority, not an afterthought. The difficulty in purging the market of goods that have been recalled shows that the burden must be on manufacturers and retailers, not consumers, to identify the known hazards before their products enter the channels of commerce. Many of the toys recalled in the last year not only put children at risk of serious injury or death, but also are evidence of substandard manufacturing practices and inadequate pre-market testing.  The best weapon in the fight to prevent injuries to children continues to be preventing unsafe toys from reaching consumers in the first place.

Shop Defensively:  Unfortunately, even toys that are in compliance with current industry or regulatory standards have proven to be hazardous, further demonstrating the inadequacy of existing standards.  So what can parents do to arm themselves against toys that could injure children? Since there currently is no full-proof safety net in place to prevent dangerous toys from reaching consumers, the message for parents this holiday season is to think defensively when it comes to toy safety.  For starters, parents can avoid many toy-related hazards by remaining cautious, identifying safety red flags, knowing what classic safety traps to look out for, inspecting new and old toys for defects and poor design, and learning to identify hidden hazards. W.A.T.C.H. cautions toy shoppers not to be lulled into a false sense of security that a toy is safe because it has a familiar brand name on the package or it’s available from a well-known retailer.

Working Together to Keep Kids Safe: Advocacy and awareness makes a difference, particularly because most toy-related injuries are preventable. Thanks in part to the efforts of W.A.T.C.H., toy safety has become an active conversation that has led to significant changes in the industry. While regulations, such as the Consumer Product Safety Act of 2008, are a step in the right direction, regulations should be a floor, not a ceiling, for toy safety. As a result of advocacy, the industry and regulators continue to be held accountable to make safety a priority and millions of toys have been re-designed, recalled, or otherwise identified to consumers. There is more work to be done to prevent needless and tragic injuries to children as a result of poorly designed and manufactured toys. A key message today is to let consumers know that while there are dangerous toys being sold in retail stores and online, awareness this holiday season and year-round can truly save lives. Behind each injury and fatality is a real child and family whose lives are often permanently affected. Even one injury to one child is too many, particularly when the injury is preventable.

W.A.T.C.H.’S 2018 “10 WORST TOYS” LIST: Consumers can help children enjoy a safer holiday season knowing what traps to avoid when selecting toys.  W.A.T.C.H.’s “10 Worst Toys” list, a hands-on tool for consumers, raises awareness of the different types of potential hazards to avoid while toy shopping. The particular toys nominated for the “10 Worst Toys” list are illustrative of some potential hazards in toys being sold to consumers, and should not be considered as the only potentially hazardous toys on the market.

ABOUT THE AUTHORS:
Joan E. Siff, President of W.A.T.C.H., began presenting the “Ten Worst Toys” list with the organizations founder, Attorney Edward M. Swartz (1934-2010), on behalf of W.A.T.C.H. in 1991. She earned her J.D. and Masters in Mass Communication from Boston University. After serving as an Assistant District Attorney in the Commonwealth of Massachusetts, Norfolk County, Ms. Siff practiced product liability litigation. Ms. Siff is admitted to the bars in Massachusetts, New York and the District of Columbia. Ms. Siff is the author of “Toy Regulation Still Lagging in Protecting Children,” published in the Leader’s Product Liability, Law and Strategy. She has given numerous lectures on behalf of W.A.T.C.H. to increase awareness about unsafe children’s products. Joan Siff has appeared on Megyn Kelly Today, Fox and Friends, Fox News Live, LawLive (FATV), CNN Radio Atlanta, NECN, The Michael Smerconish Morning Drive Radio Program (Philadelphia). Having served on several non-profit boards relating to children’s causes, she is currently a Board Member of Franciscan Children’s.
James A. Swartz, Director of W.A.T.C.H, is a nationally known trial attorney and consumer advocate. His law practice at Swartz & Swartz includes many well-known cases involving product liability injuries. Attorney Swartz has authored book chapters relating to child and product safety, including “Hazardous Playthings Causing Injury to Children,” (Children and Injuries, Lawyers & Judges Pub. Co., Inc.); and “The Common Law in the New Millennium- Protecting Our Children,”(Civil Trial Practice-Winning Techniques of Successful Trial Attorneys, Lawyers & Judges Pub. Co., Inc.), as well as numerous articles. Mr. Swartz earned his J.D. at Georgetown University Law Center. He is a member of Trial Lawyers for Public Justice, serving as Massachusetts State Coordinator; The Massachusetts Bar Association; The Massachusetts Academy of Trial Attorneys; The American Bar Association; and The Boston Bar Association, among many other associations. James Swartz has appeared on many national television programs including The Doctors, “Take It Personally” on CNN, “Newsfront” on MSNBC, “Legal Cafe” on Court TV, “Crook and Chase” on the Nashville Network (TNN), interview on Bloomberg Business News television network, and in news reports on CNN, and other national news networks.