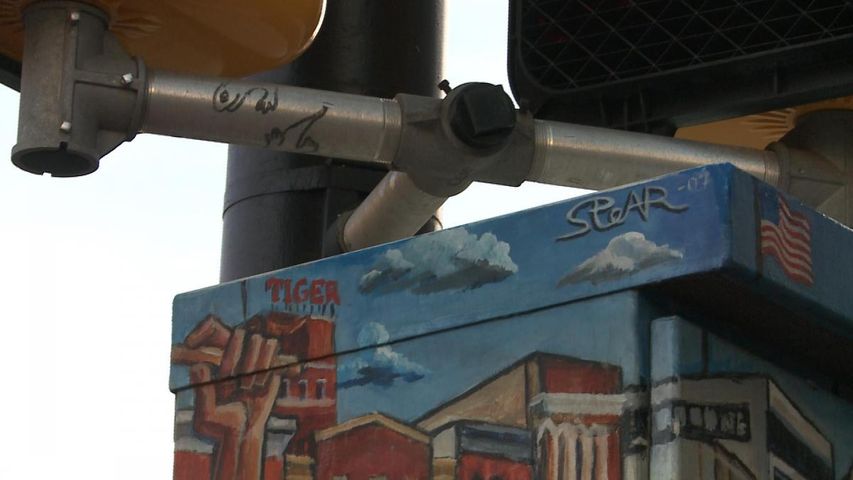 COLUMBIA - A couple dozen people took to the streets Monday to enjoy public, private, and guerilla artwork downtown in the District.

The walking art tour, led by Parks and Recreation as part of Columbia's Bike, Walk and Wheel week, highlighted well-known art such as the "Keys to the City" keyhole outside city hall, the painted traffic boxes at street crossings, and guerilla art such as "knit-bombing" where an artist will knit a cozy of sorts around a pipe or a bike rack.

Chris Stevens, tour leader and manager of cultural affairs for the city, said his favorite part of the tour was allowing people to stop and actually notice the art.

"Many times, we're flying by on the road, going 40 miles an hour," Stevens said. "You pass that piece of work, you notice it but you don't pay a lot of attention, you don't have a lot of time to interact with it. This gave people the opportunity to get up close to the artwork, interact with it, really understand the artist's feelings behind it, their concept behind it, and really be a part of it."

Many of the pieces of art are part of Columbia's Percent for Art program, which allows for one percent of the cost of new city construction or renovation projects to be used for public art nearby.

In addition, as part of Bike, Walk, and Wheel week, Parks and Recreation created a "parklet" at the intersection of Cherry and Ninth Streets downtown. A parklet is a concept started in San Francisco in 2005 - a mini-park designed to create more livable streets. The Columbia parklet has an astro-turf floors, planters, and wooden benches. The city will keep it here until May 17.