Walls Go up at New Elementary 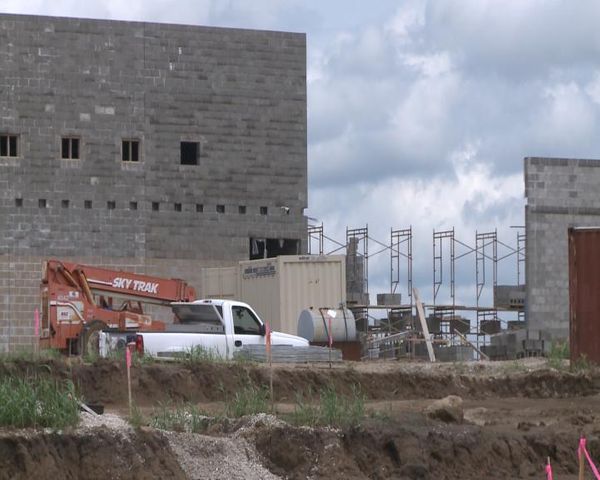 COLUMBIA - Construction crews put up walls Monday at the site of the new Battle Elementary School. The new school will be next to Battle High School, which opened last school year.

Crews broke ground on the school in October and hope to have walls up and ready for framing by the end of the summer.

Voters approved the new school as part of a 2010 bond measure. Battle is the first of four new elementaries the district will build by 2018, according to Michelle Baumstark, the community relations director for Columbia Public Schools.

"We actually have long-term facilities and a bond planned for our district. It's a ten-year plan that includes the addition of four elementary schools to our existing school district," Baumstark said.

The district will close later this month on the property for a new school south of town, which was approved as part of a 2012 bond measure.

The new school is named for the late Eliot Battle, a Columbia educator and husband of Muriel Battle, the high school's namesake. At first, community members wanted both Eliot and Muriel Battle's name on the high school, but district policy prevented schools from being named after living residents. Eliot Battle died two weeks after Battle High School opened.

Baumstark said the news schools will help ease crowding in the growing district.

"We're a large district. We have over 34 buildings we maintain across the city of Columbia. It's important for us to make sure all those buildings are up to par and in proper working order," Baumstark said.

The district has been growing consistently over the last 10 years.

"We average growth at about 200 kids per year, which is significant when you think one of our elementary schools has 200 kids in it," Baumstark said.

Construction isn't limited to new buildings and additions. CPS is renovating every building in the district, in some way, this summer. Baumstark said the district has more than $48 million in projects happening in the coming months.

"We also have a number of maintenance projects, roof projects, paving projects, all the things that need to be done to keep our buildings in proper working order for the start of school for this next school year," Baumstark said.

The district's $48 million estimate does not include the cost of Battle Elementary School. The money comes from bond issues passed in recent years, as well as the district's capital and operating budget.

Three of the district's elementary schools, Rock Bridge, Lee and New Haven, moved summer school classes to neighboring schools during the renovations. In addition to aesthetic maintenance like painting, crews are replacing sections of the roof at Rock Bridge and Lee and putting in new windows at New Haven.

The district is still drawing the dividing lines to determine who will be going to the new Battle Elementary School. Baumstark said the district expects enrollment to be around 600 students. The school will be open for summer school in 2015.