Mizzou Gets the Last Laugh For Now 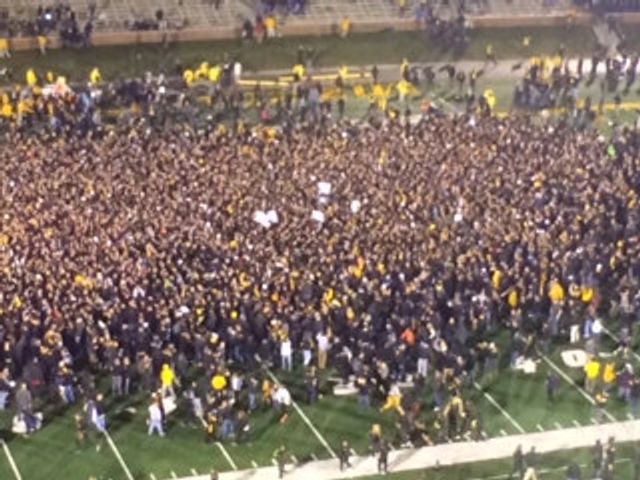 COLUMBIA - Reporters laughed at Missouri senior wide receiver L'Damian Washington back in July at SEC media days when he said he expected the Tigers to win the SEC title.

"It's all about a championship, and I think that's what you aim for," Washington said. "If you fall short, at least you know you gave all you had."

But after defeating Texas A&M Saturday, Missouri is one game away from fulfilling Washington's prediction.

"Whenever you get people that laugh at you at SEC media day whenever you say 11 wins. I wouldn't say it's embarrassing, but inside you feel some kind of way," Washington said. "And I relayed that message to our entire team."

"They set a couple standards right off the bat," head coach Gary Pinkel said. "Then what we did is I said what do you want this Mizzou football team to be known as."

"It took a really tight group of guys to all form this vision," senior offensive lineman Max Copeland said.

"I didn't say in my head alright yeah we're going to have 11 wins at this time, but I did kind of think we're going to the SEC Championship," senior qurterback James Franklin said.

"I said it was one of our goals and we accomplished it, and it helps us attain our other goals," senior offensive lineman Justin Britt said.

One of those other goals is winning the SEC title game, which would give Missouri a shot at playing for the BCS National Championship.

"I'm still on cloud nine right now, but I would say it ranks tops since we're going to the SEC Championship. I mean that's all that matters," sophomore linebacker Kentrell Brothers said.

"To have our dreams realized is... Wow," Copeland said.

After being laughed at before the season, Washington and the Missouri Tigers are now 11-1 and ranked No. 5 in the country.

"We got the last laugh," Washington said.

Missouri will play Auburn in the SEC championship Saturday at 3 p.m. in Atlanta.