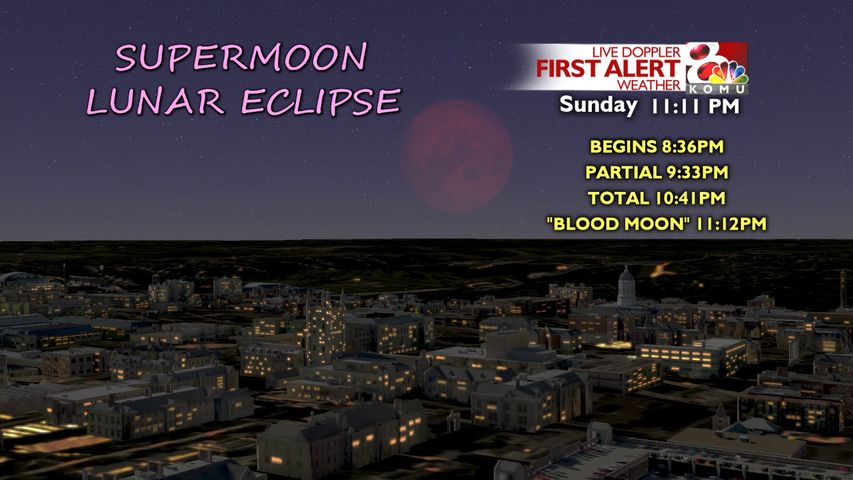 COLUMBIA - Finally something other than snow and clouds will be in the sky, a lunar eclipse! The only total lunar eclipse of 2019 will be viewable in central Missouri on Sunday evening through early Monday morning.

The total eclipse of the moon will also be viewable over all of North and South America, including parts of Europe, western Africa and northern Asia.

The moon will also appear larger than normal, designating this as a "supermoon" lunar eclipse due to its unusually close proximity to the earth of 221,000 miles.

The official title of Sunday's event is called a "super blood-wolf moon eclipse." A wolf moon describes a January full moon when wolves were most active in the early winter seen searching for food in the night.

The lunar eclipse will be occurring during the end of the Chiefs and Patriots game in Kansas City, making it only the second time in NFL history that a lunar eclipse has occurred during a NFL game.

A total lunar eclipse also occurred on October 27, 2004...the same night that the Boston Red Sox won their first World Series since 1918. Coincidence for Boston teams? The Kansas City Chiefs are hoping for yes.

THE SCIENCE OF A LUNAR ECLIPSE

The moon orbits the earth in a near circular motion, but will vary a few degrees to the north or south over it's near 28 day lunar cycle. This is why some nights the moon appears high in the north sky, or possibly more in the southern sky.

When conditions are right and the moon is in a full phase, the moon will pass into the shadow cast by the earth.

Light can bend around objects, especially large objects. Longer wavelength light such as red and yellow (blue light is considered short wave length), will bend into the umbra of the earth's shadow. A secondary, slightly dimmer shadow is cast on the edge of earth's main shadow called the penumbra.

While several partial eclipse events will be possible in 2019 and 2020, this will be the last total lunar eclipse viewable from earth until May 26, 2021.

There could be a few breaks in our mostly cloudy skies but temperatures will be very cold, in the 10s for most, dropping into the single digits for some mainly along and north of I-70 with wind chills in the negatives.

HISTORICAL MEANING OF AN ECLIPSE

According to NASA's Fred Espanek, lunar eclipse events are referenced in ancient literature and drawings, often being tied to some sort of historical event.

According to Time and Date, ancient Babylonian and Chinese astronomers were able to predict eclipse events as early as 2500 BCE. Their cultures found high significance to these events, signaling they believed an eclipse event was directly tied to the health and success of an emperor, or king. Failure to predict an eclipse meant the possibility of execution.

The bible also depicts several events in which the sun or moon either "disappeared", or "turned red." The Gospels of the New Testament also describe the sun disappearing and the sky turning black during the "Crucifixion of Jesus." This was thought to have been the writer's attempt to describe a solar eclipse. This is up for debate after NASA's recreation of these events show it also was possibly a lunar eclipse event.

The 4th voyage of Christopher Columbus was saved by the prediction of a lunar eclipse in which he tricked Jamaican natives to provide supplies and provisions after his main ship ran aground, prompting famed Missouri author Mark Twain to write the novel, A Connecticut Yankee in King Arthur's Court

NASA's lunar eclipse history page can be found here, where they have attempted to recreate a database of lunar eclipse events back to 747 BCE.

End of penumbral eclipse: 1:48am