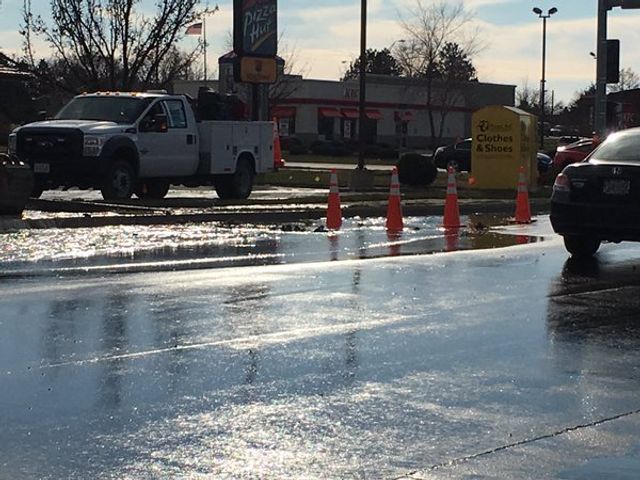 COLUMBIA – Businesses in south Columbia closed Thursday morning for a water main break at Nifong Blvd and Buttonwood Drive. Some of the stores are now open again.

Connie Kacprowicz, spokesperson for Columbia Water and Light, confirmed a private contractor hit the water line before 10 a.m. She said water main breaks are not uncommon for the area.

Rebecca Miller is the co-owner of Peggy Jean's Pies and said the water main break came with a cost.

She also said she was frustrated by the city's lack of communication.

Kacprowicz said it is difficult to get information to people right away during an emergency like this one.

"A lot of times, especially in the early stages of an emergency like this, we need to dig into the ground and find out exactly what the problem is. There's a lot of unknown things," Kacprowicz said.

KOMU 8 News contacted more than 20 businesses in the area, many who said they were experiencing problems with fresh water. Rock Bridge High School said it was not affected by the water main break.

A city worker said the businesses have a temporary water line.

A representative from Buffalo Wild Wings said he expects to have problems with the water for six to eight hours. He said the restaurant had signs up on the door and is closed temporarily due to no fresh water for the kitchen and restrooms.

KOMU 8 News had a reporter on the scene Thursday morning.

Currently at Buttonwood Drive...water is everywhere on the road. Should have brought my rain boots @KOMUnews pic.twitter.com/A6jD5kbmDW

Flooding on Buttonwood Drive in Columbia after a water main was hit @KOMUnews pic.twitter.com/AEKUZWXPFW