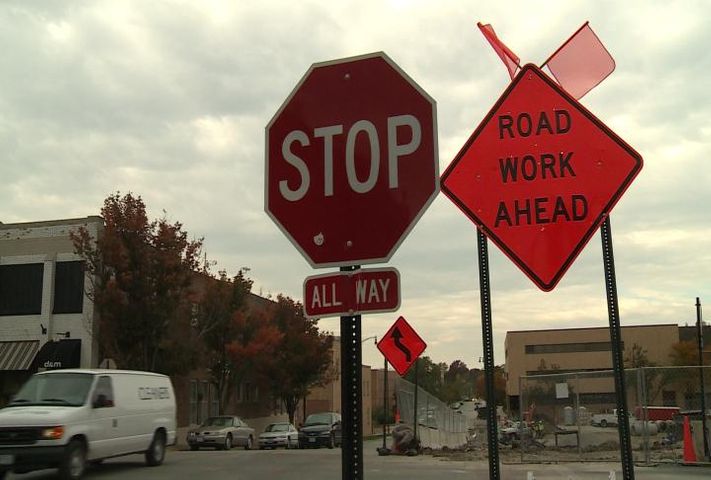 COLUMBIA - A waterline repair and relocation at the Opus construction site is causing sidewalk closures and traffic lane rerouting in downtown Columbia for Homecoming weekend.

A utility specialist for Columbia Water and Light, Connie Kacprowicz, said as the waterlines downtown get older, they have a tendency to crack and break more often.

"This particular pipe was on our watch list because it had seven breaks that we've been tracking," Kacprowicz said. "So when they were doing the development for the Opus project, the storm water pipe needed to be replaced."

She said the project is supposed to be finished by Nov. 20, but since the street was already under construction, Kacprowicz said she thinks it might actually be finished sooner.

"In the long run, the inconvenience for the customers of having those restricted parking and narrower lanes in that area is going to be a lot less," she said.

But it will still be a issue for MU's Homecoming this weekend.

Visitors are already starting to arrive in Columbia for Homecoming events, many of which take place downtown. The lane shifts removed several parking spaces on Locust Street and closed sidewalks around the construction site.

Megan McConachie from the Columbia Convention and Visitors bureau said she thinks it will slightly increase congestion on other "feeder" streets like Elm Street and Cherry Street.

"I don't know of any activities that are set specifically for Locust, but, of course, before and after the game there's a lot of activity downtown," McConachie said. "And with it being Homecoming, there's the parade as well. So that will stretch out the time that there will be additional traffic downtown."

McConachie said visitors should consider the changes when both driving and parking downtown this weekend.

"It will be important to give yourself a little bit of extra time, make sure you know the closure is going on, and plan accordingly," she said.

Kacprowicz said she drove through the shifted lanes Wednesday and didn't have any problems.

"The traffic can still get through this area, but the lanes are just a little bit more narrow" she said. "It's harder to make the turns, but the traffic lanes are still open. So people shouldn't have a problem getting around downtown during this project."

Kacprowicz also said she wanted to remind visitors that parking is still available in nearby garages throughout the weekend.

A news release from the city, however, drivers should take extreme caution in the area, or avoid it altogether if possible.