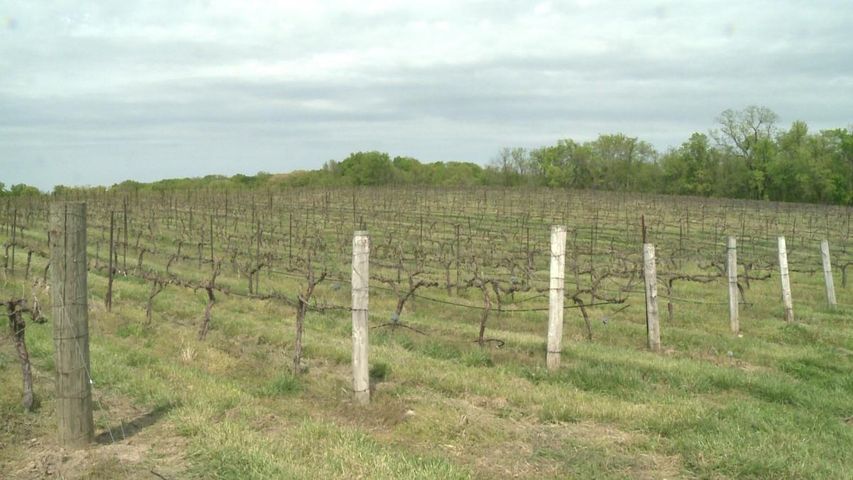 Early Thursday morning, temperatures were as low as 26 degrees. Les Bourgeois' Chardonelle vineyard recorded 32 degrees.  "This morning we came out and the leaves were crumbling, just like icicles," Les Bourgeois vineyard foreman Jacob Albin said.  This vineyard sits at a lower elevation than some of the others, making it more prone to freeze damage.  "As you can see, most of our plants are pretty well ruined, I think we got about a 60 percent loss of our grapes for this year in this vineyard," Albin said.  The winery will have to buy grapes from other growers to compensate for the loss.

Other growers in the area suffered even more of a loss.  Grape grower and owner of Sugar Branch Farm and Vineyard, MaryAnn Denninghoff, lost 100 percent of her crop at her vineyard.  She woke up at three this morning with the feeling that a late freeze was imminent.  She went outside, checked the vines then began burning fires, trying to warm up the air.  "Immediately went out the door and came down here and touched the vines and they were pretty crunchy, they were frosted over but I thought maybe there's hope," said Denninghoff.  But as the day progressed, the plants wilted and continued turning brown.  "I knew they were toast based on past experiences," said Denninghoff.  Sugar Branch Farm and Vineyard ended up losing about 50 tons of grapes from the late freeze.