Weighing the environmental risk of the Dakota Access Pipeline 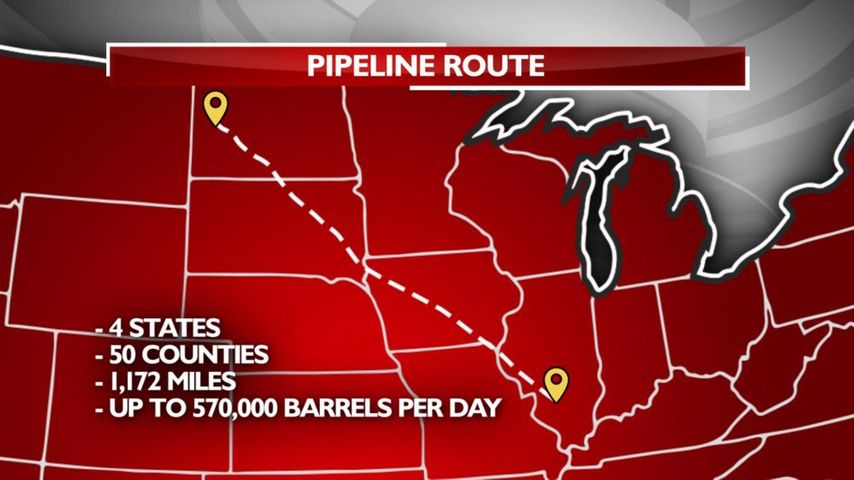 COLUMBIA - Concerns are mounting over the construction of a new crude oil pipeline in the Midwest.

If constructed, the Dakota Access Pipeline (DAPL) would run from North Dakota to Illinois. Though the DAPL itself will not enter the state of Missouri, a portion of the pipe will cut underneath the Missouri River upstream of the state.

The 30-inch diameter pipeline will travel approximately 1172 miles. Project engineers estimate it will move an average of 470,000 barrels of crude oil every day. The company sponsoring the construction, Energy Transfer, claims the finished project will fast track oil transportation across the Midwest, and alleviate traffic congestion on highways and railroads.

To environmentalists across the United States, the potential consequences of the pipeline outweigh the rewards. More and more protesters across the country have been taking to social media and holding anti-Dakota Access Pipeline demonstrations in their own cities.

Missouri has experience an oil pipeline spill firsthand. On Christmas Eve in the year 1988, a steel line operated by Shell Oil spewed more than 860,000 gallons of crude oil into the Gasconade River. It was one of the largest inland oil spills in U.S. history.

According to the St. Louis Post Dispatch, a long, thin crack in the pipeline first dumped oil into the Shoal Creek tributary, then into the Gasconade, which empties into the Missouri River. It took months to clean the spill.

According to the Texas Commission on Environmental Quality, a single drop of oil can contaminate up to 25 liters of drinking water. To put that on a larger scale, one spilled barrel of crude oil has the ability to pollute up to 21 million gallons of drinking water.

According to data by the The Pipeline and Hazardous Materials Safety Administration (PHMSA), in the year 2015 alone, oil pipelines across the United States spilled more than 103,000 barrels of hazardous liquids. The financial cost of those spills totaled to more than $253 million. The total environmental cost is still uncertain.

Sponsors of the Dakota Access Pipeline have made an effort to assure the public of the project's safety. Construction officials said crews will inspect each joint of the pipeline visually, and with an x ray, before they bury it. Company officials also said, in some instances, the pipeline engineers have gone above and beyond the minimum regulations of states and the federal government. They also said the DAPL will be monitored 24 hours a day, 7 days a week.

However, Monday's gas line explosion in Alabama proves that even with advancements in modern safety procedures, accidents can happen.

Scott Mansker, an environmental advocate for the Missouri River, said Missourians should not be willing to put the state's water up for collateral.

"If there's a major spill, if there's 70,000 gallons of crude oil leaked into that reservoir up there, we will see that effect," Mansker said. "When that sink tap comes on, and you hand that glass of water to your 5-year-old, there will be chemicals in there that would not have been in there otherwise."

The company sponsoring the Dakota Access Pipeline claims the project's construction will create between 8,000 and 12,000 jobs. Mansker argued there are other ways to achieve the same result.

"Yes, jobs are created," Mansker said. "But jobs are also created in the renewable energy industry. We know there's a clock on this 'fossil fuels' thing. We know realistically that your kids are going to get 50 percent or more of their energy from renewables. So why are we continuing to invest in a technology we know is not viable longterm?"

DAPL Building officials said the pipeline will generate $55 million annually in property taxes for the states of North Dakota, South Dakota, Iowa and Illinois. Missouri, however, will not receive any of that money because the pipeline itself never crosses into the state.

In addition to drawing criticism from environmentalists, construction on the pipeline has also outraged Native American communities. The Standing Rock Sioux tribe in North Dakota claims the pipeline construction will pollute its local water supply and decimate sacred lands that are protected by a hundred-years-old treaty between the federal government and Native American tribes.

For the past several months, activists have flocked to the reservation in North Dakota to protest the pipeline's construction. Those protests have intensified over the past few weeks and resulted in sometimes violent clashes.

A spokesperson for the Dakota Access Pipeline told KOMU 8 News the company has obtained every necessary permit to begin construction on the land. She called the protests by the Native American community, "unlawful."

Perry Bigsoldier and Crystal DeShazo are members of the "Protectors of Water and Land" activist group in Columbia. They recently traveled to the protests in North Dakota to deliver supplies to the activists.

Bigsoldier himself is of Native American decent. He said, as a member of the Otoe and Sac and Fox tribes, he considers the people of the Standing Rock Sioux to be his "cousins."

DeShazo said she wishes the world could see what she saw on that journey.

"When you see firsthand the what it's destroying, and you meet the people who live on this land, it seems completely silly that we'd even consider it," DeShazo said.

In October, the city of St. Louis passed a formal resolution to stand in solidarity with the people of the Standing Rock Sioux tribe.

Bigsoldier said his group's next objective is to get Columbia to consider a similar resolution.