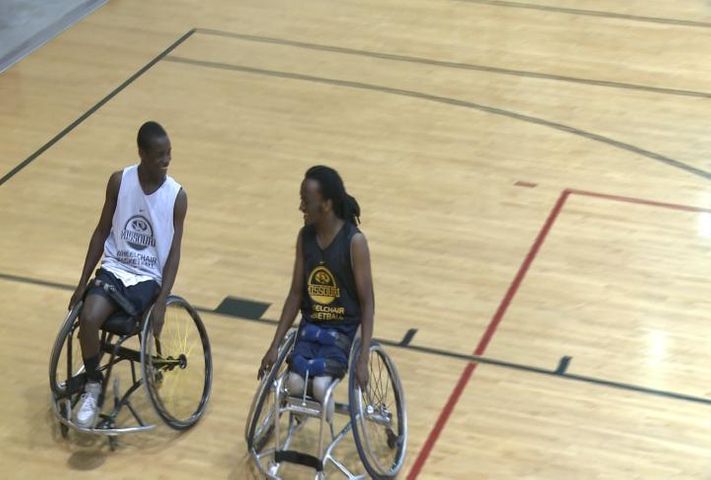 COLUMBIA - 19-year-old Munya Mahiya lost a leg to cancer four years ago back home in Zimbabwe.

"For the first two years after my disability I didn't think that I was going to play any sport at all, but when I met somebody in the streets back home who said we have a club, where people with disabilities can play basketball, I said wow great let me join," Muniya said.

Munya fell in love with the sport, but could only play a few times an year.  However, he found out about Ron Lykins's basketball camp at Mizzou.

"Munya was just an e-mail that I got from the U.S. Embassy down there saying, hey can we send this kid to camp? And I thought well sure let's see what we can do, we're fortunate enough to secure a scholarship for him to get him here and they took care of his cost for getting him here and now he's been a part of this," Coach Lykins said.

Munya loved the camp and come this fall he wants to come to Mizzou for good as a law student and wheelchair basketball player.  While Munya is new to the game and his future at Mizzou is uncertain, James Bohnett is an experienced and talented wheelchair basketball player who will be joining Mizzou's team this fall in his freshman year.  James also has an interesting background. He was born in Ethiopia and at seven months old was adopted by an American family in San Jose, California.  He was born without legs, but that's never stopped him from playing sports.

"It's been great for me and it's been a fantastic and life changing experience for me. Ever since my involvement in sports I've always been a very social and active person because of it and I've gotten to meet some amazing people because of the things that I do now," James said.

Coach Lykins also has a lot to be smiling about when it comes to the growth of his program.

"And If we put together something of quality here, a good camp here, where we have good instruction, good instructors, and we bring in good kids from all over, more and more people want to come here so it becomes a destination where people want to be a part of this camp and that makes us feel good because it shows us we're doing the right thing," Coach Lykins said.

And doing the right has paid off for Coach Lykins.  In January he was named coach of the Team USA Wheelchair Basketball Team, something he never would have imagined when he first became involved with the sport.

"I needed volunteer hours in college, and I didn't have a car so I volunteered with our wheelchair basketball team on campus and I really enjoyed it. I had a 90 hour kind of internship and I got that done in two weeks and I just continued staying with it," Coach Lykins said.

The sport has clearly changed the lives of one man and two boys.