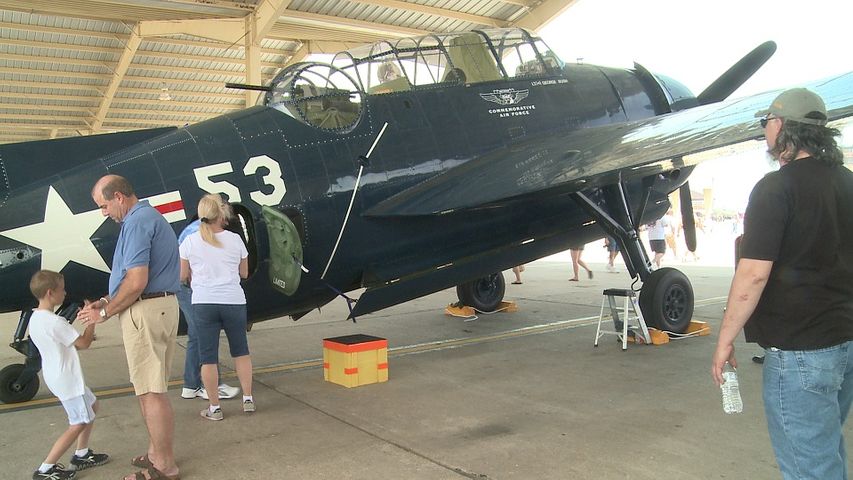 In addition to active combat aircraft including the F-22 stealth fighter and one of the B-2 stealth bombers based at Whiteman, aircraft on ground display included several examples from World War II. These aircraft included a B-25 medium bomber and an A-26 attack bomber.

Tom Wagoner, a member of the Commemorative Air Force which restores and flies vintage military aircraft, said just 43 B-25s are still flying. He said the B-25 is easier to fly than other bombers of that era such as the B-24 heavy bomber, of which he said just two remain operational.

Wagoner said the thing he likes most about the air shows he flies to is the reaction he gets from veterans, particularly former B-25 crews. He said three weeks before the Whiteman show, he was at an air show in Arkansas where he met a man who flew a naval variant during the Second World War.

"You could see the memories just coming back in his face," he said.

Ed Kostiuk, who is part of a crew flying a restored A-26 attack bomber, said his favorite part of the air shows he attends is the children he meets. He said children today should understand what their grandparents and great-grandparents had to do during that era.

"In a few decades, the B-2 might be obsolete and showing up at air shows just like this," he said, pointing to the B-2 named "Spirit of New York" parked just a couple hundred yards away.

The air show continues through Sunday. Admission is free.