Wilber Bacon: Home at last or soon to be on the run again? 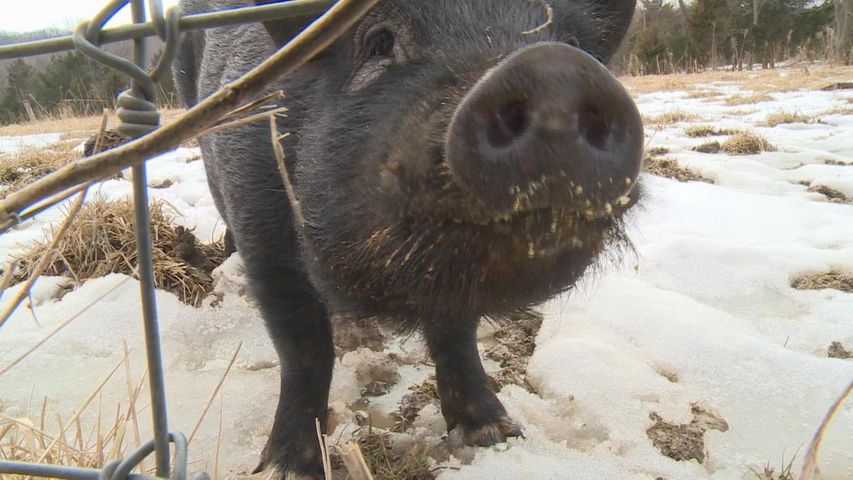 MOBERLY - He may be small of stature, but he caused a huge stir in the town of Moberly.

Wilber Bacon, a pot bellied pig, stands just less than 2 feet tall. For months, he roamed the streets of Moberly.

But now he is staying in a field with four cows on Kirkendoll's farm just outside Moberly.

Wednesday afternoon, he enjoyed a lunch of spaghetti, tomato sauce, and grain at his new home.

"He loves any sort of pasta," Kirkendoll said. "He just eats it right up and this is the sort of food the cows don't want to steal from him."

She said pot-bellied pigs like Wilber Bacon can root there way out of just about any enclosure.

"There's a fence around him right now," Kirkendoll said. "But really, he could leave at any point if he really wanted to."

Wilber Bacon has done just that in the past.

"The first time we saw Wilber, we caught him in our dog cage, but he escaped within three minutes," Kirkendoll said.

Some in Moberly said they're worried Wilber Bacon could find his way back to town again.

"You have to think about traffic accidents too," Latimer said. "You don't want people swerving out of the way, especially at night, when a black pig is running around."

"One day, they were running after him for more than four hours," Neese said. "There's no doubt he's quick."

After Wilber Bacon was on the run for three months, the Moberly Police Department said it issued a search warrant to a property where Wilber had been known to stick around.

Neese said Moberly Animal Control eventually caught up with the pig.
Kirkendoll said she's not really sure how Wilber returned from Animal Control to her farm.

"But I'm happy that he's come back," she said. "I'll always have food waiting for Wilber Bacon here."

Making grunting noises amongst the cows as he chows down on his lunch of spaghetti, Wilber Bacon seems at least temporarily content with his new living situation.

Latimer said he's not sure that the pig can ever truly be contained.

"He may stick around for a while, especially if there's food," Latimer said. "But these pot-bellied pigs, there's no doubt they've got a mind of their own."

Dan Patterson said if Wilber Bacon does return to town, some will consider it "open season" for the pig.

"If he's roaming around the woods, rooting around and getting into trouble, he's considered a feral pig," Patterson said. "And that's one you can shoot."

Neese said while Wilber Bacon was running around Moberly, City Hall received requests for permits to shoot the pig.

"I think some people just wanted to be able to get rid of him if they were worried about him rooting around in their gardens or being a nuisance," Neese said.

That doesn't make a lot of sense to Kirkendoll.

"It's winter. Who has gardens at this time of year anyway?" she said. "He's just a friendly little pig who wanted a bit of adventure."

Wilber Bacon may be technically outside Moberly city limits on Kirkendoll's farm for now, but his Facebook page still gets plenty of traffic - Wilber Bacon the pot-bellied pig has collected more than 700 likes.