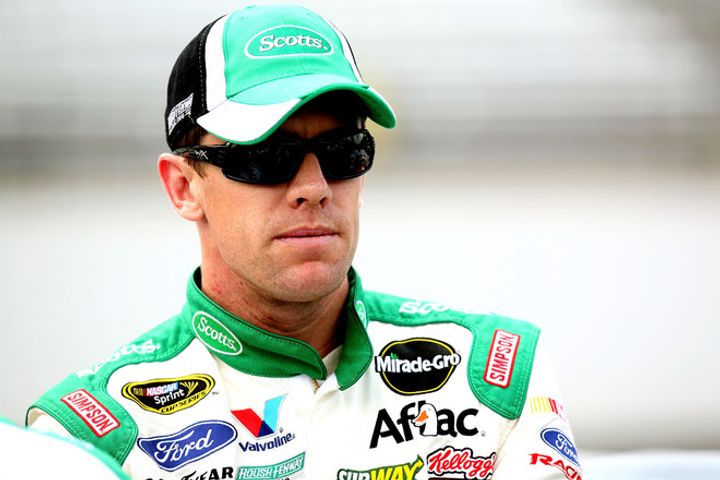 WATKINS GLEN, NY - After being postponed due to rain until Monday, the NASCAR Sprint Cup drivers put on quite a race for the loyal fans who were able to wait it out at Watkins Glen. The final laps were filled with hard racing and even harder accidents. A green-white-checker finish led to several lead changes and one car flipping before the checkered flag flew. Originally Carl Edwards was scored in 14th place, but as NASCAR sorted out who was in what position when the caution and checkered flag flew together, he ended up in 12th place.

Edwards started the race on Monday morning in eighth place under a light mist and heavy fog. The No. 99 Scotts Ortho Ford was loose early in the race so the crew made a spring rubber adjustment during the first green-flag stop on lap 24. A caution came out before the entire field had cycled through the pits which left Edwards at the tail end of the lead lap. Since he was already in the back, crew chief Bob Osborne called him to pit road to top off their fuel before the race resumed.

Edwards was back in 25th on lap 32 of 90 but began to work his way to the front. Within 10 laps he was up to 19th and he stayed out during the next caution to move up to 13th by lap 53. The car was still not handling as well as he hoped and he lost a few positions as the race continued, falling back as far as 20th by lap 57.

By lap 60 the team knew they were within their fuel mileage window to make it to the end of the race. Edwards came to pit road for the final time under green on lap 61 for fresh tires, air pressure and track bar adjustments. Once again the caution came out before everyone had pitted. Luckily he did not lose a lap and was 17th for the restart with 21 laps to go.

As the laps wound down, Edwards was 15th with 15 laps remaining. He moved into 14th after a caution on lap 87 which set the field up for a green-white-checker finish. On the final lap of the race Tony Stewart slowed in front of Edwards as a huge wreck started by Boris Said occurred behind them. Originally Edwards was scored in 14th, but as NASCAR reviewed where the drivers were running when the caution came out he was ultimately awarded 12th place.

"I didn't get to see all of the finish," Edwards said. "I saw some of it on the big screen when I was pulling in. I hope everybody is all right. There was a little bit of rain coming, a green-white-checker at a place like this, you knew it was going to be dramatic so I hope everybody is all right. We didn't have the day we were looking for, but we'll go to Michigan, the home of Ford, and we'll take our Aflac/Ortho Fusion there and hopefully have a run like we usually have at Michigan and get another win. That would be huge.

"Today's race was wild. We just hung on all day. It's not the day we wanted, but it could have been a lot worse. Our Ortho Fusion was okay. There were spots on the track it was bad, but Marcos did a great job. I'm happy for him for getting a win in a Ford. Now we'll go back to Michigan and hopefully get that points lead back, but, really, we need wins so maybe this will be a little kick in the behind for us to go out there and get some wins. That's what we need."

Edwards and the No. 99 team are tied for the lead in the NASCAR Sprint Cup Series point standings with Kyle Busch. The next race will be Sunday, August 21 at Michigan International Speedway. Coverage will begin at 12:00 p.m. (CT) on ESPN.