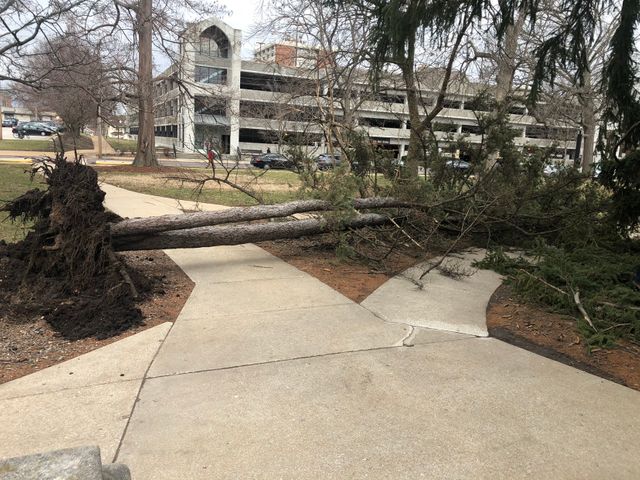 BOONE COUNTY - While freezing temperatures have left mid-Missouri over the past few days, strong winds have taken their place as an inconvenience for residents.

Winds were howling around 25 to 30 mph on Thursday, with a high of 45 mph. These conditions toppled trees and disrupted power lines across Boone County.

Trees were marked down at University Avenue outside of Waters Hall, John A. Stewart Park and Mexico Gravel Road.

Missouri Department of Conservation Forestry Regional Supervisor, Brian Schweiss, said what happened before this week is also partly to blame for the destruction.

"The main thing is we have saturated soil right now," Schweiss said. "If the root systems of the tree are compromised someway or have been degraded, there could be greater potential for blowing over trees."

Schweiss said people need to constantly be aware of their tree conditions.

"We just tend to not think about our trees until we have a major catastrophe or bad weather conditions. You really need to think about them on an annual basis," Schweiss said.

Schweiss advises homeowners to stay away from their trees if doing construction and other outdoor work and calling an arborist if concerned about tree damage.

In Fulton, the damaging winds caused bricks to fall off of a building on West Fifth Street.

An employee at Re-Made for a Purpose said when the bricks fell, it sounded like bowling pins being knocked over.

The owner of the store thinks the harsh conditions going from frozen to thawed loosened up the bricks in Fulton’s famous Brick District.

In Jefferson City, the wind ripped the covering off the Capitol construction project.

State spokesperson Brittany Ruess said the covering is meant to keep crews out of the weather.

“The covering is designed to rip when winds exceed 50 miles per hour,” Ruess said. “The reason is to prevent lifting and damaging to the scaffolding and building.”

Ruess said there wasn’t any damage to the Capitol Thursday and that construction crews stayed off the scaffolding.

The severe winds flipped a semi-truck off US-63 North in Clark Thursday. Traffic was backed up about half a mile while two tow trucks flipped the semi-truck rightside up.

According to the Missouri State Highway Patrol, the driver was not injured.