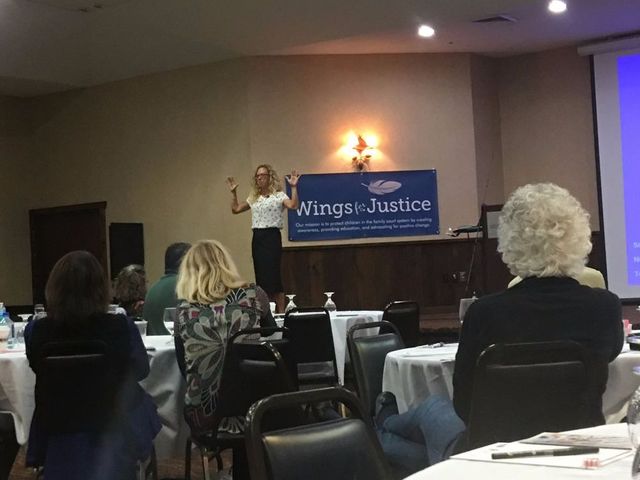 COLUMBIA – From domestic abuse survivors to social workers and clergy, the Wings for Justice workshop Monday aimed to raise awareness about problems that exist within the family court system. Before the workshop began, the CEO of Wings for Justice, Wendi Miller had everyone read the mission statement allowed.

“Our whole goal is to create awareness, to provide education and bring positive change to the family court system through advocacy. This is the life blood of who we are,” Miller said.

Miller said after her own personal struggle, she felt the family court system was broken. She claims she was in an abusive relationship and when she finally was able to get out of it, her ex husband ended up with legal custody of her two children in Colorado. She has been in an eight-year battle since then to re-gain custody of their children.

Family attorney Jeffrey Basinger said it is impossible for children to be considered "always safe," no matter what the court order is.

Miller said her ex husband was a pastor of a church who used his social status to manipulate the situation.. She said her children begged her not to let them go with their father, but legally they had to. Eventually, her daughter began claiming she too was being sexually and physically abused by her father. Miller said she hid out in a women’s shelter in Michigan for three weeks with her children in an attempt to protect them. Refusing to give the children over to the father led to her arrest and a 61-day stay in a county jail.

Miller said she created Wings for Justice to help other people going through similar situation like hers.

“Our hope is that we can come alongside and bring healing to those who suffered and hope and education to those entering into it and walking alongside of them through it because it’s difficult and it’s painful and many of them feel they are there alone,” Miller said.

Miller said the main purpose of the workshop was to invite anyone and everyone in the realm of protecting kids.

“We invited case workers, counseling centers, judicial officials, legislative officials and even law enforcement. We just wanted to educate them and get a conversation started.”

A domestic abuse survivor, Jeannie Watson, was among those who attended the Wings for Justice event. She said she experienced multiple abusive relationships but hopes to help others through organizations like this one.

“It means everything; it means your life. You know when I look at my children and other kids and other women who have gone through this, you see these organizations as very hopeful. And I may get tearful, but without it we have nothing, we are left with nothing and stripped bare,” Watson said.

Basinger said he did believe that the system works well.

“I am sure that there are cases that have been mishandled by a particular Judge, parent or attorney. However, I do not know what changes could be made to improve our current system,” Basinger said.