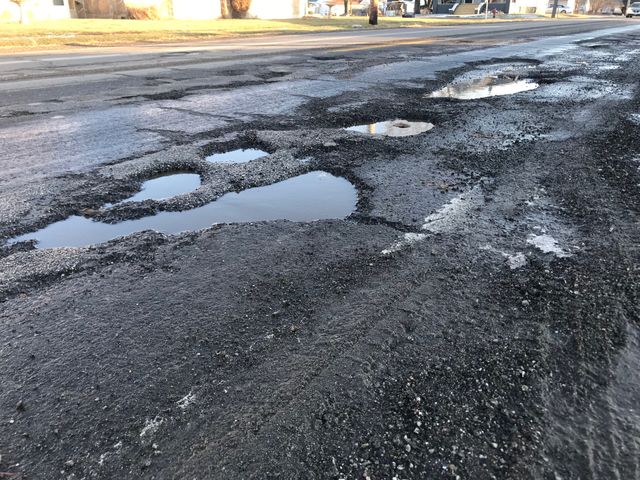 MOBERLY - Our recent winter weather hasn’t been easy on anyone or anything, especially roads in Moberly.

“Today we anticipated the rain stopping and the sun shining,” Sanders said. “So this was the first day since the last weather event that we’ve been able to get back out.”

Sanders said because of the freezing and thawing weather patterns, crews have been slower to fix potholes. Their priority has been keeping the roads cleared. He said the city has used almost 1,000 tons of material used to clear roads this calendar year.

“We’ve been keeping a lot of nights and weekends open for getting material down and getting those streets salted and sanded,” Sanders said.

“They’re doing the best they can,” Sherry Heddinghaus said. “I know some of the people are working 12 to 15 hour shifts and not taking a lunch break or a supper break.”

Sanders said the city has tried to keep residents updated on social media about when and where crews will be out.

“We try to provide factual information and updates and let people review that and decide on what’s right or wrong,” Sanders said.

Some residents have responded in frustration about certain areas they want to see fixed. One of those roads is South Morley St., which has an excess number of potholes. The street falls under MoDOT’s jurisdiction.

Sanders said there can be confusion about who is responsible for repairing which roads.

“I’ve never seen a road come apart that quickly,” Sanders said. “MoDOT crews just haven’t had time to respond to it. They’re aware of it.”

Heddinghaus said she encouraged angry residents online to have patience, especially with the inclement winter weather.

“People just need to have a little bit of patience and let it happen,” Heddinghaus said. “We’ve had back-to-back cold weather, ice, rain and sleet. It’s just hard to do.”

Sanders said after potholes receive short-term repairs in the winter, crews will then revisit the problem in the summer for a more long-term solution.