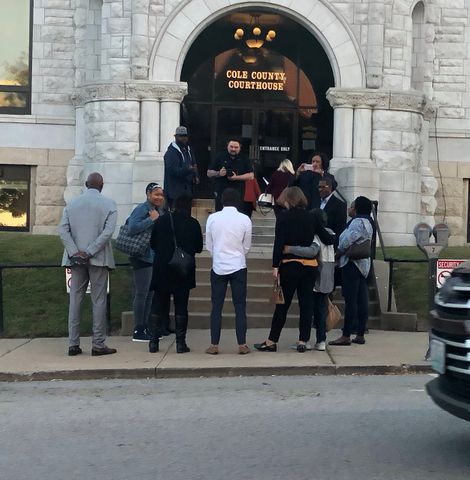 JEFFERSON CITY - Jonathan Irons has been confined to an orange jumpsuit for almost 23 years in the state prison system.

Irons's legal team presented both new and old evidence on Wednesday in Cole County court with the hopes of getting a re-trial.

WNBA player and Olympic Gold Medalist Maya Moore is a long-time friend and advocate for Irons.

She is currently taking a hiatus from basketball to focus on another passion. She is using her platform to bring awareness to wrongful convictions.

Irons's defense team argued the fingerprint reports were not consistent, and the prosecution did not have actual proof linking the DNA to him.

After hearing about the new fingerprint evidence, the court could hear Irons cries from the corner of the room.

"There were a lot of emotions today," Moore said.

"Number one, being heartbroken that we couldn't console him as part of our family. Two, happy for him that the truth is finally being told on the record - the truth of the fingerprint evidence. Also, just anger of...it's been 23 years for that evidence to finally be talked about and brought to light," Moore said.

University of Arkansas Psychology professor and witness James Lampinen said, "this case would make a case study on how not to do a line up."

Lampinen was one of five witnesses who testified in the evidentiary hearing on Wednesday. Irons also testified in court for the first time.

Irons said the lead detective of the case, the late Michael Hanlen, fabricated oral statements from his interrogation.

The prosecution argued the defense could have reached out to Detective Hanlen when he was still alive.

Moore says she is glad the truth came out today.

"We have the power to make this process go as fast as possible, to bring justice to a real human being's life. I would hope that justice can come swiftly," Moore said.

The judge ordered Irons's team to petition for a re-evaluation of the fingerprint reports within the next month. He is expected to make a decision whether to reopen the case by December 9.