Woman says goodbye to the dog that saved her life 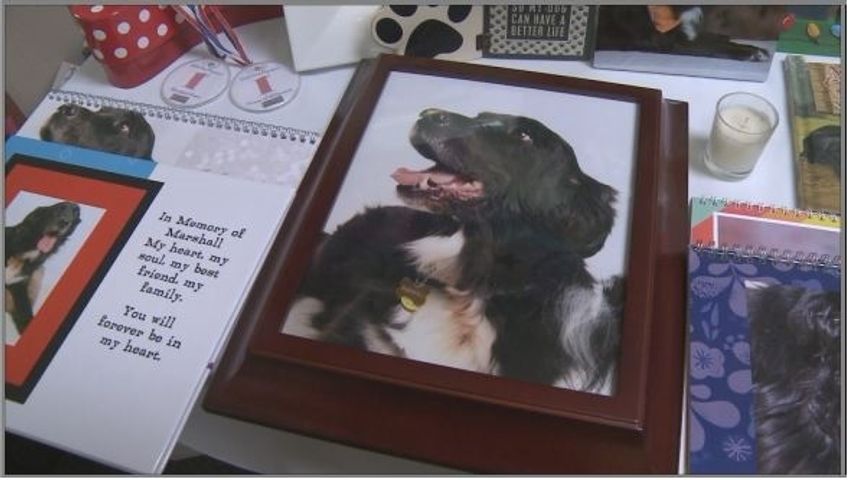 After battling pneumonia for months, Bonebrake's body was sent into a state of septic shock. Doctors poked and prodded her body to little avail. Her chances of survival were slim.

Until her dog Marshall was allowed to visit her in her hospital room.

"I was giving up," Bonebrake said. "Marshall saved my life. He gave me the motivation to keep going."

Linda adopted Marshall from Columbia Second Chance back in 2009, a privately funded no-kill shelter that took Marshall in from an animal shelter in Fulton that was ready to put him down.

"As soon as I met him, he laid on my lap and I just knew," Bonebrake said. "I just knew that Marshall was the dog for me."

The two spent over eight years together. Taking photos and making memories everywhere they went the two became inseparable.

Bonebrake is the owner of Karma Care, a metaphysical shop that offers holistic services. Bonebrake brought Marshall to work every single day, her customers quickly grew to love to his presence.

"My customers love Marshall," Bonebrake said. "He loves them too, he is always happy and eager to be loved on.

Suddenly, Marshall was in need of Bonebrake's help.

Marshall was diagnosed with cancer in October and developed a severe case of laryngeal paralysis which made it difficult for Marshall to eat and even breathe at times.

Bonebrake and Marshall's time together was coming to an end.

Melody Whitworth is the Director of Unchained Melodies, a local dog shelter that is also no-kill. Whitworth knows Bonebrake closely and sees how everything came full circle.

"Marshall had a lot of health issues toward the end of his life," Whitworth said. "Luckily Linda was healthy enough to help him with his health issues and be by his side. Just as he was for her."

Bonebrake wants to open her heart again to another dog, but is not in a position financially to do so.

"All of his surgeries toward the end of his life were expensive," Bonebrake said. "I want more dogs, but I need to make sure that I can responsibly take care of them."

In the future, Bonebrake hopes to foster dogs through Unchained Melodies. A program that allows responsible adults the opportunity to foster dogs at no cost to them.

"No dog can ever take the place of Marshall," Whitworth said. "That dog will have a piece of her heart that she'll never get back."

Bonebrake said that she will be ready, in time, to save the lives of more dogs. In honor of the dog that saved hers.