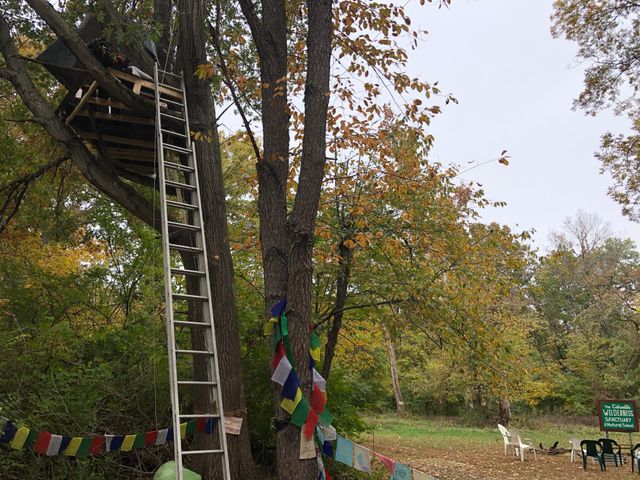 COLUMBIA - During the changing seasons, you'd expect to see leaves turning colors if you looked into the trees. But people near Bluff Dale Drive on Monday night saw a protest instead.

Sutu Forte, a member of “It’s Our Wild Nature,” has been sleeping in a tree off of Bluff Dale Drive since 11 p.m. Monday. She said she refuses to come down until they cancel the trail project.

Neighbors that live off of Bluff Dale Drive and the environmental group, 'It’s Our Wild Nature,' are frustrated that trees are being cut down in their neighborhood to build a trail.

“If they do this, it’ll be over my dead body,” Forte said.

The environmental group is concerned that if the city creates this trail, more than 40 trees will be destroyed in the process. The project starts at the east end of Rollins Street and connects to the Bluff Dale Drive cul-de-sac. It will connect to an additional trail from Stadium Boulevard to Hinkson Creek Trail.

Columbia Parks and Recreation will be working on this project all of November.

One resident of Bluff Dale Drive, Brian Johnstone, said he is concerned that the city is spending unnecessary funds. According to City of Columbia Public Works, the trail costs $1.74 million dollars.

“I can not think of any rational reason why the city would spend that kind of money,” Johnstone said.

Steve Sapp, City of Columbia spokesperson, said they are concerned about Forte’s health and safety and hope they can find a solution.

“We are disappointed that we can’t come to an amiable arrangement,” Sapp said.

Construction for the trail will officially start this Monday, Nov. 4, according to Sapp. The City of Columbia sent letters to all residents of Bluff Dale Drive with what the next two weeks of construction look like.