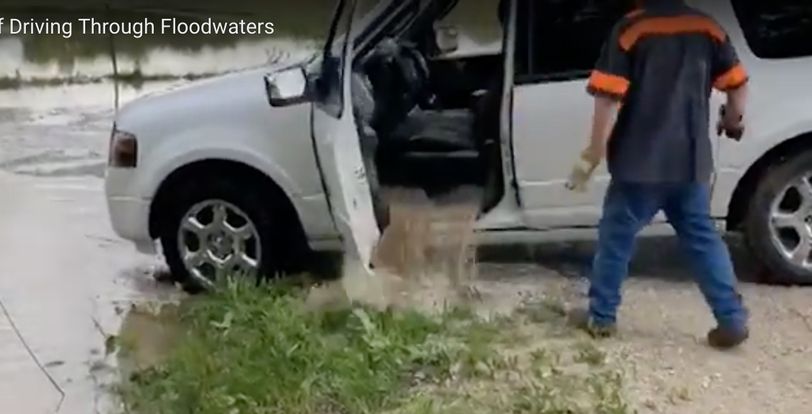 JEFFERSON CITY - A woman who attempted to drive across a road flooded by the Fabius River in northeast Missouri says she regrets putting her life in danger.

MoDOT is calling her story a "survivor's cautionary tale."

Kate Dougherty shot a video at the scene after she was rescued by the Marion County Sheriff. The video shows her SUV being pulled from the water by a tow truck, and then water pouring out when the driver's side door was opened.

"It was scary," Dougherty said in the video. "It wasn’t like a ton of fun to sit on the top of my vehicle for 45 minutes today."

She also said it was embarrassing seeing the sheriff show up.

The Missouri Department of Transportation released a statement saying this is a good time to remind motorists that barricades and closures due to water over the road are not designed simply to inconvenience travelers.

He said dangers lurk beneath the surface of the water covering roads.

"There’s a possibility that the road that was once where the water is no longer exists. Even the best four-wheel-drive vehicle will lose against rapidly moving water and no traction.”

KOMU 8 News reporters have seen numerous vehicles driving through flood waters during the last two weeks. MoDoT and various law enforcement agencies have said it is a persistent problem.

Missouri State Highway Patrol Troop F posted a video to their Twitter on Tuesday showing a driver barging past several barricades onto a the flooded roadway at Highway 40 and Rocheport Gravel Road.

An officer nearby witnessed this and leapt into action to help the driver.

It posted the video to its Facebook page and said: "Remember, when you drive into a flooded road, you don't only endanger your life, but now you endanger all of the lives of first responders who have to rescue you."

In her video, Dougherty said, "Don't be ridiculous, don't be dumb, don't drive through it, turn around. Seriously."