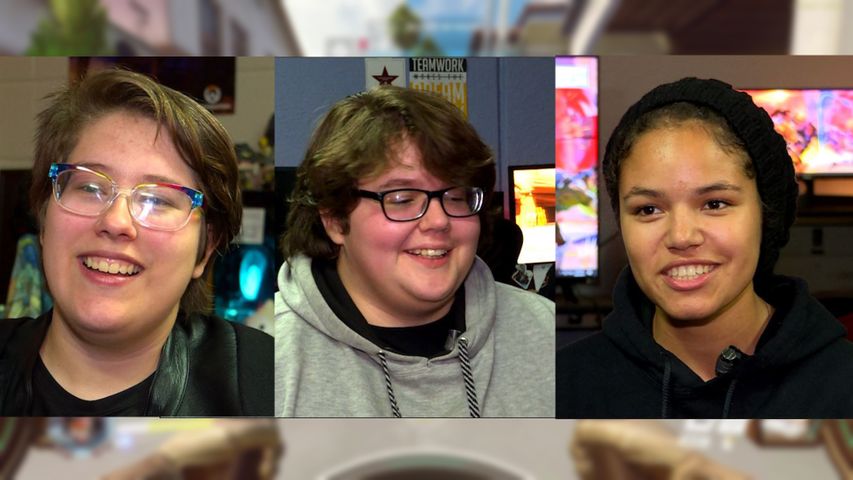 COLUMBIA - Market data by Statista shows the number of women in gaming is steadily rising. In 2006, female gamers made up 38% of the industry's market. By 2019, that number increased to 46%.

With this increase has come a greater awareness of sexism within gaming culture.

Shelby Thompson, a Stephens College freshman from Reeds Spring, said encountering stereotypes and prejudice is to be expected.

"Either they're super excited, almost to the point that they're clingy, or they obviously expect you to be bad or only play a certain role in a game," she said.

That "certain role" would be a healing or support player, Thompson said. One who helps his or her teammates from a distance, away from the front lines of combat.

It's a playstyle not fitting of Ryan Glover.

"I'm the one designated to take out toxic people," she said.

The sophomore from Hughson, Calif., said prejudice against women is often obvious within the first few seconds of a match.

"For some reason, every time a guy hears a girl's voice it's a surprise, which is kind of frustrating," she said.

Glover said, once she's had time to show what she can do, the attitudes in the game lobby quickly change.

"I feel like as long as you really show a passion for games, everybody is pretty inclusive."

Thompson said, in her experience, the stigma has never been severe enough to deter her from playing.

"It's not hostile, there are harder communities to be in," she said. "I've, personally, enjoyed it. It's never gotten to the point where there's so much negativity that I'm like, 'I need to leave, I can't be here anymore,' because I'm so passionate about it. But I've heard horror stories, of course, of people and what they have to deal with."

For Kasper Ramirez, a freshman from Canoga Park, Calif., gaming is a pastime they prefer to enjoy with friends, not an online queue.

"I try my best to play only with this tight group of people," Ramirez said. "Other than that, anytime I do end up branching out, it tends to be a bit more interesting. I know sometimes it can be an awful experience, or a great experience. It just kind of depends."

Thompson said, when she was younger, people thought nothing of her brother's interest in video games, but were often surprised to discover she was interested in them.

"Games are for everybody," she said. "They're not just for boys."

Ramirez said eSports is a niche that fits them perfectly.

"I'm a very competitive person," Ramirez said. "I love to challenge myself to try new things. Just the fact that I heard about competitive gaming, I was like, 'Yes, this is exactly where I want to be.'"

Thompson said, in eSports, it all comes down to hours logged.

"It doesn't matter what gender you are," Thompson said. "You can still play games the same. It's just about how much time you spend on them."

Glover said, historically, the gaming industry has been primarily focused on serving the male demographic.

"It's very male-inclusive. Women are there, they're just kind of in the underground," she said.

Glover said while more women are involved in online streaming of game sessions, fewer women compete at the professional level.

Despite this, Glover expressed optimism over recent industry growth.

"Gaming, in itself, is becoming bigger, so I think it could potentially become more inclusive," she said. "Even in the sense of just commercials for gaming laptops and games themselves. You see more women in the commercials so I'm hoping that people are starting to make a push for more female gamers."

Despite some progress toward inclusion in the industry, Glover said she doesn't expect too much, too soon.

"I think, generally, it will be more inclusive. I don't think it will take a giant leap or anything," she said.

The Stephens College eSports season schedule can be found here.