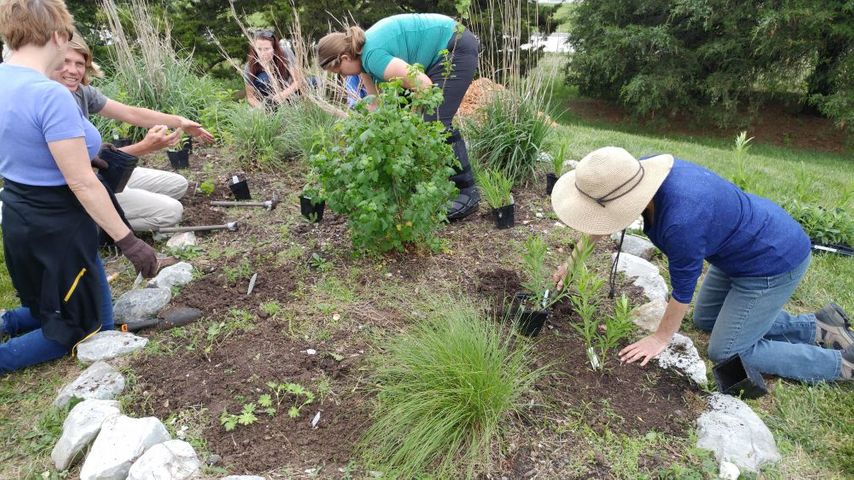 COLUMBIA – The city of Columbia paired up with a state-based conservation organization called Grow Native! to promote growth of native plants in the homes of participants.

The Show-Me Native Yards and Neighborhoods workshop included a planting demonstration for multiple natives species in the Stormy’s Meadow Garden area behind a Columbia fire station. Other presentations focused on properly planting native species in backyards to help pollinators and handle inclement weather.

“Our land use today is so varied that sometimes when we have things that can come together on a piece of land, we can show people how this can all work together for the betterment of everyone,” Jason Jenkins, monarch and pollinator coordinator for Missourians for Monarchs, said.

Native plants once encompassed more than 200 million acres of the prairie land in the United States and Canada. According to the National Park Service, less than one percent of these native prairies remain.

Amy Humphrey Hayes, Missouri Prairie Foundation administrative operations coordinator, said this workshop helped participants gain awareness of this national decline in native species. She thinks native species could be on the rise in Missouri due to outreach programs.

“I think there’s a huge demand for natives, so it’s encouraging to see people wanting to learn more about them,” Humphrey Hayes said. “There’s just no substitute for actually digging in the dirt and seeing how these plants are actually planted.”

Humphrey Hayes said the Missouri Prairie Foundation travels to workshops to provide hands-on experience with native plants all around Missouri, in addition to some neighboring states in the Midwest.

“I hope with the workshops that people can leave with a better sense of where they can purchase native plants,” Humphrey Hayes said. “They can incorporate them into all different kinds of settings such as patios, or gardens, or containers and maybe spread the news to their neighbors and other friends about how they can use native plants in all different settings.”

Danielle Fox, community conservationist for the city of Columbia, said the city would look into projects that introduced native plants near medians and roundabouts.

“The goal is to bring it around the city to different locations so we can bring it to the people,” Fox said. “We can do a lot on our public lands, but really it doesn’t make a huge difference until we are doing it everywhere.”

Fox said the city would consider another native plant workshop in the fall.