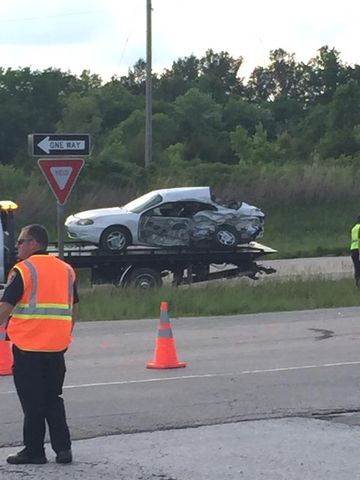 FULTON - A World War II veteran died Monday evening in a car crash on Hwy 54, according to the Fulton Police Department.

William Rogers, 92, was trying to cross  the highway when his car was hit by a truck traveling westbound. Rogers was pronounced dead on the scene. Two adults, one child and two dogs were in the truck, but none were injured. Rogers was a preacher at the Fulton Church of God.  Police tested the truck driver and found he was not under the influence of drugs or alcohol.

"The heavy traffic and somebody not paying attention looks like that was what caused the accident right now," Sergeant Joe Schramm of the Fulton Police said.

Rogers was a preacher at the Fulton Church of God. Police say his next of kin has been notified. The names of those in the truck have not been released. Police say they do not believe drugs or alochol was a factor in this accident.

The photo below shows Fulton Police Sgt. Billy Kamp trading his camera in for measuring equipment while on the scene of a deadly traffic accident near Fulton, Missouri, on U.S. 54 Monday, May 25. Kamp, Fulton Police Department's traffic accident reconstructionist, was called in around 4:30 to take photos and measurements of the crash that can be used later.

A tow truck from Tom & Steve's Wrecker and Recovery Services arrives to the scene of a car crash near Fulton, Missouri on U.S. 54 to remove the car driven by 92-year-old William Rogers on Monday, May 25. Rogers was a World War II veteran and died in the crash.

Officer Tim Howell directs traffic at a crossover near Fulton, Missouri, on U.S 54 Monday, May 25. Because of the crash, traffic extended to the nearest exit.

Members of the Fulton Fire Department tow a black Chevy Silverado away from Highway 54 in Fulton, Missouri on Monday, May 25, 2015. The Silverado t-boned a passenger vehicle crossing the highway.

Officer Tim Howell halts traffic on Highway 54 near Fulton, Missouri after an accident on Monday, March 25, 2015. The accident resulted in one fatality.

The Fulton Police Department and Fire Department work to clear an accident that occurred on Monday, March 25, 2015. The two-car collision on Highway 54 West slowed traffic down to one lane.

[Editor's Note: This story has been updated with the lastest information and to correct the name of the church.]