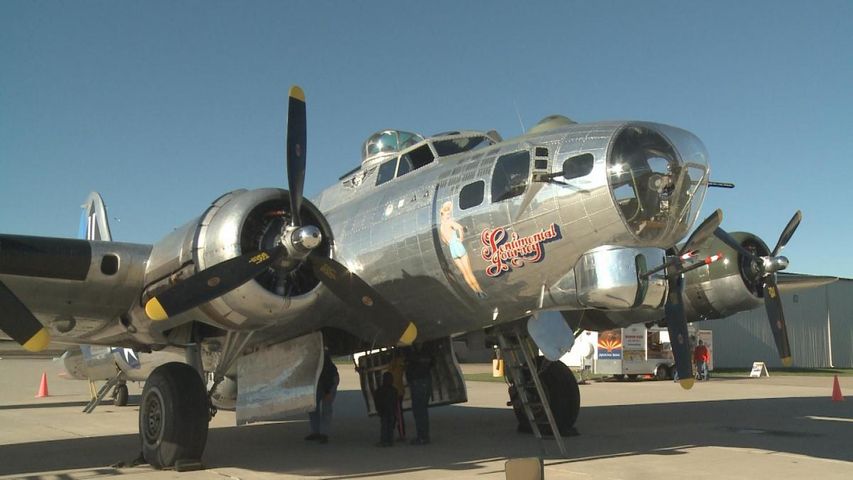 COLUMBIA - The Commemorative Air Force flew a B-17 bomber from Arizona to the Columbia Regional Airport for display Friday, through the weekend.

95-year-old Norbert Westhues served during World War Two as the machine gun operator for B-17 bombers. Friday, he had the chance to return to the past and see one of those planes on display at the Columbia Regional Airport.

"It makes me think about England. Going over Germany," Westhues said. "You'd start out with clear weather and you'd get over there and there would be snow on the ground."

Westhues said there are only a few people left who share his experiences.

"I haven't heard from the boys, any of the rest of the crew," Westhues said. I don't think they're alive anymore today. I think I'm the only one left."

The Commemerative Air Force tries to honor World War Two veterans and keep their stories alive by flying the B-17 bombers from coast to coast, teaching the public about the planes and the men who operated them.

"The sacrifice that the vets gave in World War Two, the harsh conditions they worked in and the tough life they had and many didn't continue through life," said pilot Dale Churchill. "The average age on these things was about 19 years old. You think about the kids running around college right now and this was the end for a lot of people in World War Two."

Churchill's father used to pilot the bombers and inspired Churchill to follow in his footsteps.

The B-17 Bomber will be on display through Sunday. It's free to view the plane from the outside and five dollars to explore the inside. It costs $800 to fly in the plane.

Editor's note: This story was edited to correct the misspelling of Norbert Westhues's last name.