Wreaths Across America Honors and Remembers US Veterans 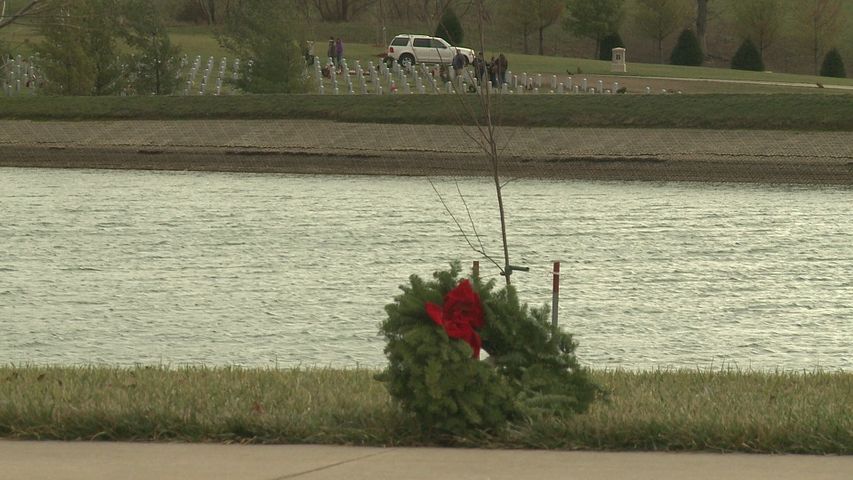 JACKSONVILLE - People gathered at six cemeteries throughout Missouri on Saturday, including the Missouri Veterans Cemetery, as part of the nationwide Wreaths Across America program, which serves to honor American veterans in remembrance of their service for the United States.

Several dozen people came out for the ceremony at the Missouri Veterans Cemetery, held under gloomy, overcast skies.

But despite the somber nature of the event, it wasn't sadness that surrounded the small pavilion; rather, the general tone of the ceremony was severe pride and respect for the servicemen it intended to honor and remember.

The ceremony included a speech by Navy veteran Larry Page, who is also the father of deceased Marine Lance Corporal Rex Page, as well as the formal presentation of wreaths to representatives of each branch of the service.

Page spoke about the importance of remembering the men and women that put their lives at risk for the sake of their countrymen.

"It is because of their valor and their courage that we live in America; that we can go to the church of our choice or choose not to go at all. Or we can vote for whomever we want or choose not to vote at all. And that's a privilege that, if we take for granted, we'll lose. It's that simple," said Page.

All of the wreaths were laid along the road throughout the cemetery by those that attended the ceremony. There weren't enough for each grave, and organizers said they didn't want to show any disrespect by leaving some graves bare.

Page said ceremonies like this help keep the memory of his son, and other deceased veterans, alive. Still, he added when it comes to showing gratitude to veterans, a formal occasion isn't always necessary.

"A simple thank you means so much to them," said Page.

He said he also hopes people remember it's not just those who fight in combat, but every veteran member of every branch of the service that should receive thanks and recognition.