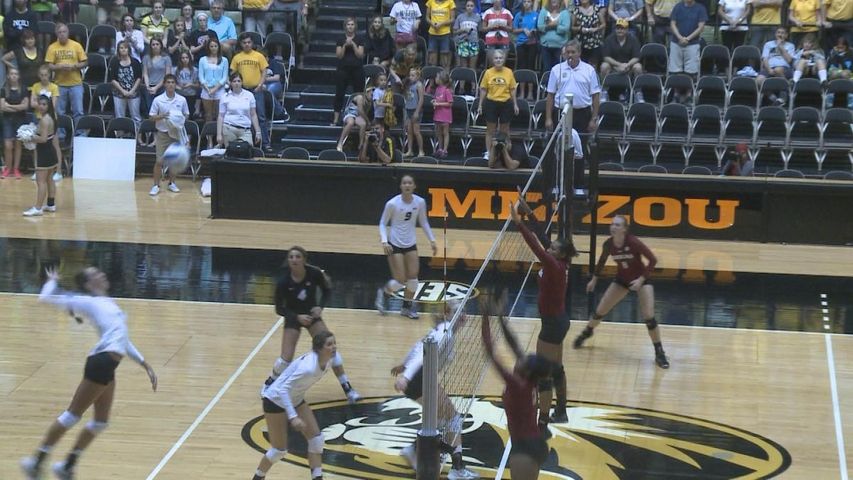 COLUMBIA - Looking at stats, this year's Missouri volleyball team might be one of the best ever, but looking at the roster, it's also one of the youngest.

It's fitting that Missouri volleyball says its motto for this year's team is "something to prove".

"We just didn't finish where we wanted to last year, so it's just something that we use to remind ourselves that hey guys even though we have a great start, we have a lot more that we want to prove," Senior Setter Molly Kreklow said.

On a roster of 13 players, six are unproven freshman and two more are sophomores, making it one of the youngest in Wayne Kreklow's time at Mizzou.

"They're all really good players and they've played a lot, but they haven't played in environments like this," Wayne Kreklow said. "You know, it is tough and the only thing you can do when you're out there is just try to settle them a bit."

But with a 16-0 start, the best in 32 years, the inexperienced team is the best one he's ever had.

"The pieces all really fit right now with this group," Wayne Kreklow said. "We've got the bulk of the team from last year back, which helps. That team had a couple of really big holes in the lineup that they were kind of limping through and the freshmen have come in a field those gaps really really well."

Part of the secret to success, is a little sister mentoring program the team put in place.

"Each upper classmen has a little sister, one of the freshmen on the team, so we just try to watch them and look out for them and make sure they're doing ok, because you kind of need someone to look out for you and make sure you're ok, and we just wanted to make this feel like home for them," Molly Kreklow said.

"My big is actually Lisa Henning, so you can't go wrong there," Freshman Defensive Specialist Carly Kan said. "They've just been really helping be comfortable and just believing me and knowing that I can do it, and that helps my confidence."

The team is one of only seven unbeatens in the nation, winning its last 10 games in straight sets, but coach Kreklow says this team doesn't worry about stats.

"We've had team in the past that I could've said were worried too much about what's on the paper right now, but I really don't get that sense from these guys, Coach Kreklow said. "And I think a lot of that is from Molly and Lisa. I mean they're just playing."

The young Mizzou volleyball is proving to everyone that age is just another number they're not worried about.

The team says the next thing it has to prove is it can perform in the SEC after going 10-10 in the conference last year.