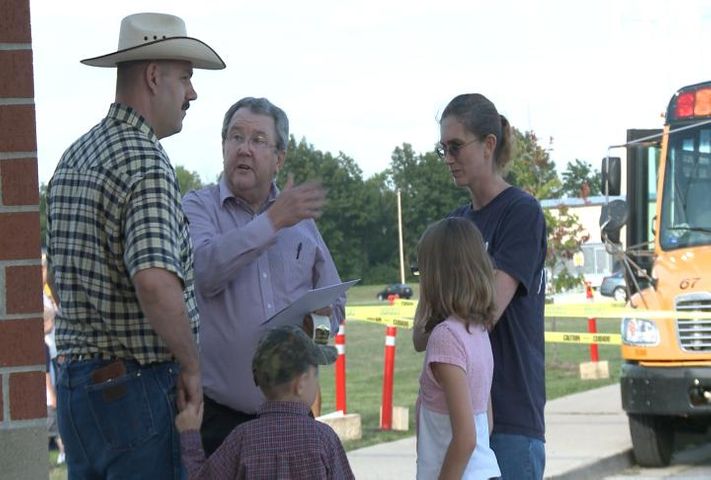 HALLSVILLE - The Hallsville School District resumes classes on Monday and welcomed back its youngest students with a lesson in bus safety Thursday evening.

"According to the National Association of Pupil Transportation, in the last seven years, 84 students have been run over by buses or been hit by drivers running stop-arms," said Robert Cook, safety coordinator for the Hallsville School District.

Cook believes the youngest kids should learn how to exit a bus and learn about the "danger zones" around the bus.

"It's the start of being proactive instead of reactive," said Cook. "Training our youngest kids to be safe around the bus."

The danger zone is 10-feet on either side of the bus and 10-feet in front of the bus.

"Our youngest kids are hard to see, and so we're asking them to walk out 10-feet from the bus," said Cook.

In addition, Cook advises children who cross in front of a bus to walk 10-feet in front and wait for the bus driver to prompt them to cross.

"It's very important for this one," said Scott Pass, father of a new first-grader at Hallsville Primary School.

Pass recently moved to the Hallsville School District from Columbia. This is the first year Pass' son will ride the bus to and from school.

"It's a chance for him to be out on his own, it's where kids start making their first decisions," said Pass.

Pass said while he can tell his son to look both ways when he is with him, the problem is when he is not around.