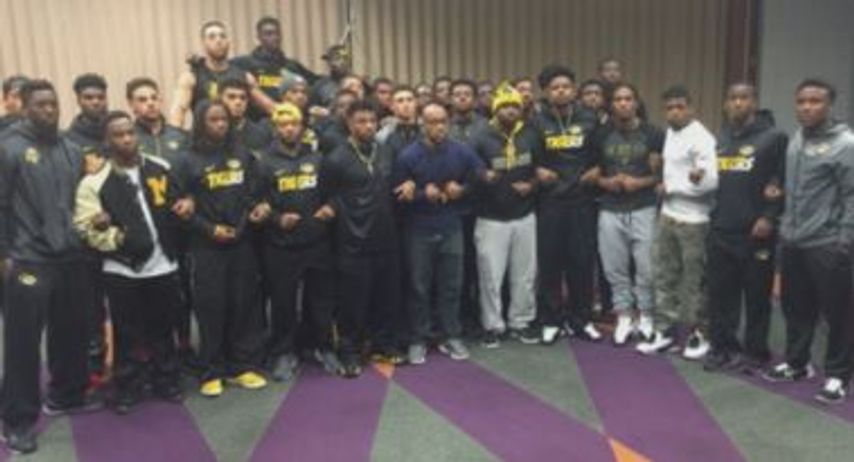 COLUMBIA - The moment the MU football team announced on Twitter that it wasn't going to play until former UM Systems President Tim Wolfe resigned, the Concerned Student 1950 movement was thrust into the national spotlight. A photo was tweeted by some members of the team locking arms, with Coach Gary Pinkel backing his players. Within in a week, two top university officials resigned.

Some KOMU 8 News viewers questioned whether KOMU 8 News covered any of the previous racial incidents on campus that lead up to the football team's involvement.

Pam Bess emailed KOMU 8 News saying, "Hello! I am an outsider looking in, but would like to know why it took the football team to bring these issues to light? Did I miss the local news coverage of the racial issues at MU prior to the national level carrying the story? Everything seems to indicate that the problem existed for a while. Did none of the local media get wind of this independent of CNN??"

KOMU 8 News Director Randy Reeves said the station covered the story long before CNN and other national media outlet's knew what was happening. He said KOMU 8 News reported more than a dozen stories before the protests became national news.

However, both Reeves and KOMU 8 Sports Director Chris Gervino agree the story escalated after nearly half the football team said they wouldn't play until Wolfe resigned.

"Once the football team got involved, it really shed a light on the subject because, again, it speaks to the power of sports, the popularity of sports," Gervino said.

Reeves also said KOMU 8 News has been covering racial issues since he's been with station and plans to cover any future issues that may arise.

"I think our coverage of that has been fairly extensive for as long as I've been here," Reeves said. "13 years and we've been covering issues like this sporadically for 13 years."

KOMU 8 News would like to hear what you think of the coverage of the protests both before and after the football team's involvement.

Let us know on Facebook, or Twitter, then watch KOMU 8 News on Fridays evening at 6 for Your View of the News.