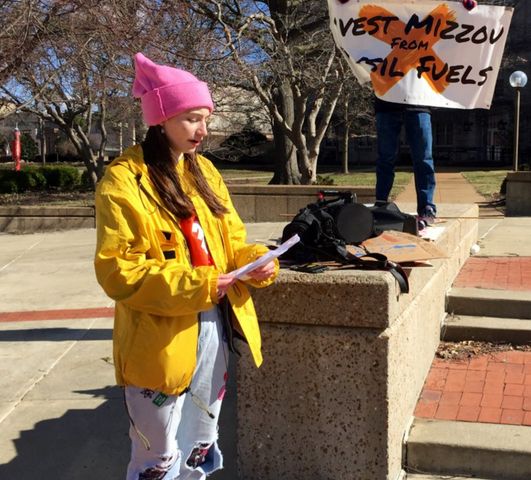 COLUMBIA - Chanting crowds and groups of marching students took to MU's campus on Friday to call action to climate change.

The U.S. Youth Climate Strike is a national event with a mission for students demanding recognition and immediate action of climate change from elected representatives. The movement's main intention is to "disrupt social order by skipping school in the attempt to force legislators to acknowledge their demands."

The strike specifically focuses on the Green New Deal, a transition to 100 percent renewable economy and the end of additional fossil fuel infrastructure creation.

"We need to take climate change into our own hands, because the corporations are doing it for us, and this is what's happening to the world," student and participant Barb Kuensting said.

Members from the Rock Bridge Young Democrats, Mizzou Energy Action Coalition and the Mizzou Democrats took part in the event. The strike consisted of marches every hour, specifically targeted at times when students were between classes, and ended with a final rally at noon.

"We always need people to just promise that they'll be here and actually show up," participant Haley Gronniger said. "It does matter, and it matters now. Just because you aren't affected today doesn't mean you wont be affected tomorrow."

Some onlookers were not pleased with the rally.

"We're not working party lines," Dalton Archer, a member of Mizzou Republicans as well as the American Conservation Coalition, said. "It's too partisan here. And I don't like that."

The national strike held a total of 1,325 events planned in 98 countries.