"Zaching" Against Cancer Comes to MU 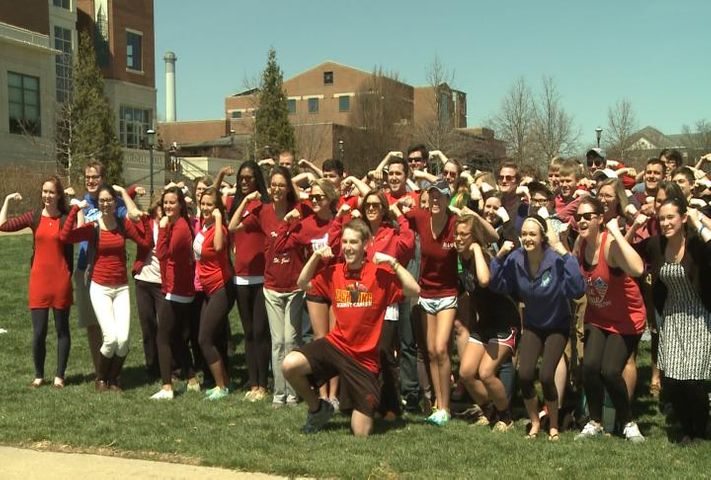 COLUMBIA - University of Missouri students posed for a picture while flexing their biceps at Tiger Plaza Wednesday. It was more than a picture to MU student Zack Newman. He said it was a way to bring closure upon his friend's passing and to celebrate his character.

In 2012, a picture of Newman's good friend from high school, Zach Lederer, went viral. The picture is of Lederer as he sat in his hospital bed after having surgery to remove the tumor in his brain. He was flexing his biceps as he looked into the camera to show his family and friends he was doing fine.

"It was really something to see that despite all odds, he kept such a positive attitude. You would never know something was wrong with him," Newman said. "He would always say he was living the dream and he was the only person I ever met to not say that sarcastically."

It became an Internet sensation. Not long after, students at the university Lederer attended in Maryland posed in similar pictures. Then other cancer patients started posting pictures doing the pose. Even celebrities like Justin Bieber and Lil Wayne took photos doing what later became known as "Zaching".

Lederer overcame many obstacles and lived years of life which doctors told him that he would never see past.

On March 11 Lederer lost his battle with cancer at the age of 20. Newman said it was important for him to bring Lederer's legacy here to Columbia.

"Having the 'Zaching' at Mizzou gave me the ability to channel my grief into something productive and have something good come of something so bad," Newman said.

Newman said the support from students and faculty at MU was amazing. He said it not only helped him bring closure to the death of his friend, but helped Newman carry on Lederer's legacy. It's a legacy, Newman said, that is to live life to the fullest.

"[Lederer's] parents were just told to make him comfortable and just accept it. Zach didn't accept it for a minute," Newman said. "You should always fight the good fight. Even though Zach passed away earlier than anyone would have liked him to, he spread a message that will live on a lot longer."

Newman said he hopes to continue this as a tradition in his years at MU, and even after. He said he wants to see the picture have more people in it each year, to spread the message about his friend's life.

To learn more about the Zaching Against Cancer Foundation click here.