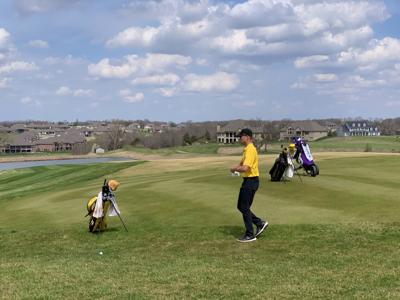 After day one, Kansas State had a hold of 1st place as a team and the top individual performer. With a total of 558 strokes, the Wildcats had a two stroke lead on Mizzou. A large reason for Kansas State's success is Will Hopkins. Hopkins was the individual leader after the first 36 holes, and he shot a 64 (8 under par) in round 1.

Will Hopkins and the Wildcats would not fair as well in the final 18 holes. Hopkins would post two double bogies and finish +2 on the day. The team as a whole did not move the needle as they finished even in the final round.

Kansas State’s Will Hopkins chips it next to the cup on 9. He started the day as the tournament’s individual leader but has since fallen back (+1 today) @KOMUsports pic.twitter.com/46TukcuOrY

As Kansas State struggled, the Tigers got hot. Missouri started the round -16 collectively and finished the tournament at -25. The -9 under finish was a collective effort with the likes of Ross Steelman, Tommy Boone, and Walker Kesterson all finishing under par.

The Tigers played 36 holes yesterday and will complete the final 18 today. Currently, Ross Steelman sits at 134 through 36 just 1 back of the individual leader Will Hopkins from @kstatesports @KOMUsports pic.twitter.com/xKmtulujAk

Tommy Boone for #Mizzou walks off of 18. The Tigers lead the tournament at -23, Kansas State has fell back to -16. @KOMUsports pic.twitter.com/DbX0r7SDRe

Walker Kesterson for #Mizzou walks off the 9 hole green after a par. @KOMUsports pic.twitter.com/YCrykEItS1

Each team had five golfers play for the tournament with he top four scores being counted towards total team score. The other two golfers that represented the Tigers were Yu Ta Tsai and Rory Frannssen. On Tuesday, Missouri took Yu Ta's score of 72 while Frannssen finished +3.

For #Mizzou, Yu Tu Tsai putts in for par on 9. Missouri, as a team, trails Kansas State currently by 4 strokes (-19 to -15)@KOMUsports pic.twitter.com/QmfvRQzLQ7

The golfer of the day and entire tournament was Ross Steelman. The former Rock Bridge Bruin turned Missouri Tiger shot a 66 (-6) in the final 18. For the 54 holes, Steelman finished an impressive -16 and won 1st place in the individual tournament.

The leader! #Mizzou Ross Steelman is -1 through 9 and -11 overall to lead the MU Tiger Invitational. @KOMUnews @KOMUsports pic.twitter.com/WKPM6vuZRn

Steelman had a slow start with only one birdie on the front nine but then really turned on for the back half. He hit five birdies in the last nine and didn't go over par the entire round.

Ross Steelman driving on 13 in Slo-Mo! He leads #Mizzou and the tournament at -13 (-3 today). @KOMUsports pic.twitter.com/2NNk44jFf3

The Tigers as a team preferred the back nine at Old Hawthorne. A total of 16 birdies were made on the back nine compared to a mere 4 on the front today.

Ross Steelman now has a 3 stroke lead as he is -15 (-5 today) with 3 holes left to play.@KOMUsports pic.twitter.com/udI5MqyOCp

After the round from Steelman, Tommy Boone was the first teammate to congratulate him. Boone is a junior for the Tigers and finished 13th in the tournament.

Ross Steelman brings it home for the #Mizzou Tigers! He’s the outright MU Tiger Invitational Champion finishing at -16 (-6 on the day)! @KOMUsports pic.twitter.com/hNKBqLcJPV

Ross Steelman spoke after the round and described the importance of a team win going into the playoffs. The Missouri Tigers are hoping to appear in the NCAA regional tournament and today's victory helped their case.

The Mizzou men have a few weeks off and will next appear in the SEC tournament on Wednesday, April 21, in Sea Island, Georgia.