ASHLAND - Ashland chief of police Lyn Woolford has filed a lawsuit against the city of Ashland and its mayor, Gene Rhorer.

Woolford, who was placed on administrative leave last week, is accusing Rhorer of taking "retaliatory action" and violating his right to due process.

The lawsuit alleges that Rhorer demanded that Woolford send Ashland police officers to his residence on at least two occasions, for the purpose of removing Rhorer's girlfriend from said residence.

Woolford believed that it was not the responsibility of the police department to interfere with Rhorer's personal business, as there was not an immediate threat of violence.

Woolford also previously served as city administrator, but was terminated by Rhorer from that position in late March "with no explanation."

TJ Forck, who rents a billboard on Highway 63 North, showed his support for the police chief by gaining awareness to a meeting Tuesday night at 7. 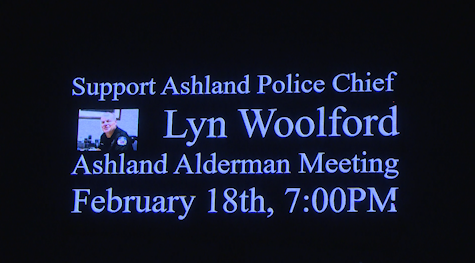 "I put that on the billboard to drum up community support, Chief Woolford has done so much for our community," said Forck. "I just think as many people that he's affected, he deserves our support 100 percent."

While Woolford is on administrative leave, Ashland's city deputy chief, Terry Toalson, is expected to serve as the interim chief of police. The Ashland Board of Aldermen is expected to make the appointment official at their next meeting on February 18, 2020.