Boone County Counselor recognized; $2.8 million to be dispersed to County

Ameren first filed a complaint with the Boone County Board of Equalization in 2018 disputing the valuation of its natural gas distribution system in Boone County. The board didn't extend its deadline for appeals, and Ameren appealed to the Missouri State Tax Commission. The Commission made its decision in September, and Ameren didn't appeal it.

Dykhouse worked on the litigation in the complaint on behalf of Boone County. Because of his work, around $2.8 million will be dispersed to 25 public entities that normally receive a percentage of Boone County property taxes. This includes school districts around the county.

Dykhouse said having the ability to disperse to school districts is something that he finds satisfying.

"These are entities that are doing good work and affect everybody who lives here," he said. "So it is satisfying, professionally, to be able to be a small part of what they're doing in funding their essential activities."

Money will be distributed to each of the six school districts, with roughly $85,000 going to the Centralia R6 district, and almost $1.78 million going to Columbia Public Schools, according to a press release provided by the Boone County Commission.

Johnathon Sessions is the Vice President of the Columbia Board of Education. He said that the money coming into the district is something that will help not just the students in Columbia, but Boone County as a whole.

Sessions said this is an issue across Missouri, as Ameren has filed similar complaints with 16 other counties. He said that Boone County is lucky to have someone like Dykhouse working through instances such as this.

"This isn't the first time something like this has happened. Thankfully here in Boone County we have CJ Dykhouse," he said. "He's able to fight for all the municipalities and when we think of those municipalities, we mean school districts, which means he's fighting for the children of Boone County."

Dykhouse said it's most important that the money will help the community by going back to public entities.

"Everybody has a little slice of this pie, and it's professionally satisfying to be able to have made a little bit of a difference for those folks," he said.

Most of the money will go to school districts in the county, but the rest will go to civil and state services, cities and other areas like a Columbia downtown improvement project. 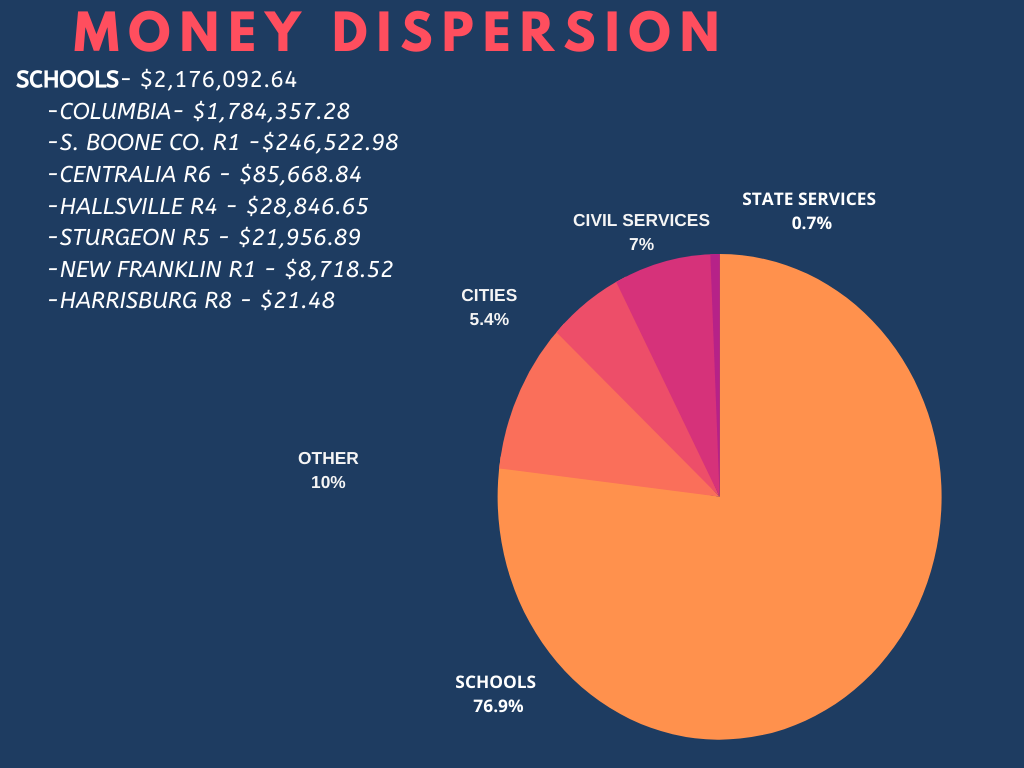 The money will be dispersed on Friday by the Boone County Collector.

Boone County Counselor recognized; $2.8 million to be dispersed to County