Columbia man dies from injuries sustained in May crash

COLUMBIA - Randall Siddens, 34, passed away Monday afternoon from injuries sustained in a car crash on Grindstone Parkway in May, according to a Facebook post from his wife. 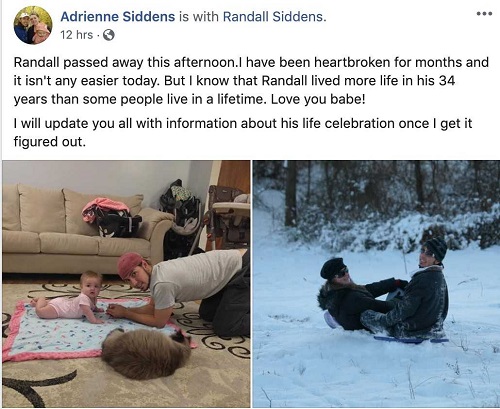 Columbia police say McCracken was going 18 miles-per-hour over the speed limit and was video chatting when she hit Siddens near Bearfield Road on May 5.

Employees from Fleet Feet told KOMU that Siddens was very well known in the running community.

Nancy Yaeger, owner of Fleet Feet, who also belonged in multiple running groups with Siddens, said he was always positive and fun to be around.

"He was the nicest person in the world," Yaeger said.

The TriZou Triathlon is sponsored by University of Missouri Health Care and occurs every year.

Wayne Morse, a runner in the triathlon the last four years, said it is a lack of respect when people don't acknowledge runners and cyclists on the roads.

"I think people need to pay attention and be aware of their surroundings," Morse said.

Siddens is survived by his wife, Adrienne, and three children under age three.

A GoFundMe page, that was created to help cut down medical costs for the family, met their goal of $50,000.

Running community remembers man who died from injuries in May crash