COLUMBIA - Hayden Holt crashed his car into a utility pole and died after a brief vehicle pursuit by Columbia Police Department officers in the early hours of Dec. 6, 2019. The pursuit began when the Hallsville teenager failed to signal at a green light in downtown Columbia. Then he ran a red light.

Under the Columbia Police Department’s previous policy, “pursuit of violators for misdemeanors and non-violent felonies are prohibited absent supervisor approval.”

The new department policy that went into effect March 20, 2019 — one of the first policy actions of then newly named interim Police Chief Geoff Jones — no longer includes that restriction. The result: 64 police pursuits were logged by the department last year.

According to a public records request filed by the Missourian, in 2018 the department logged 13 vehicle pursuits. That adds up to a 392% increase in a single year. 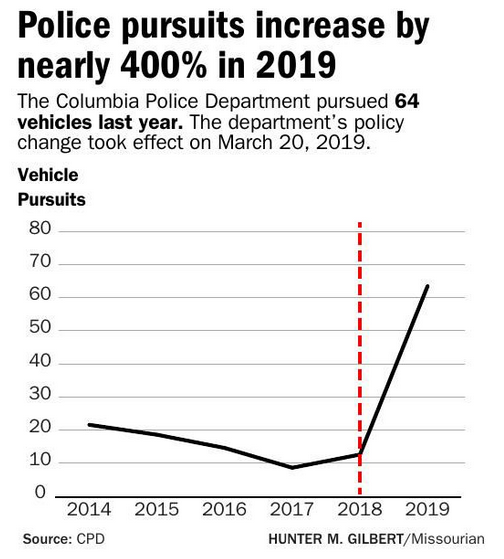 Asked Monday at a hastily called news conference whether the pursuit that ended in Holt’s death was worth it, Jones demurred.

“You can’t make that ... . None of us in here can make that determination in hindsight,” Jones said. “That wouldn’t be fair to anybody.”

The department’s internal affairs unit is still investigating the conduct of the officers involved in the pursuit. At least one officer involved was placed on administrative leave but has returned to duty.

In February, the Missourian filed a Sunshine Law request for video from the dashboards of all officers who engaged in the pursuit of Holt. Monday morning, the Columbia Police Department invited the Missourian and other local outlets to a meeting to watch the footage and ask questions about the department’s pursuit policy.

At least nine police officers took part in some stage of the chase, based on the video provided by the department. Footage from two officers’ dashboard cameras was played for reporters at the meeting.

The series of videos shows a chase that began with a traffic violation and escalated into a pursuit across central Columbia that eventually reached speeds of 80-90 mph. At one point, an officer was driving 87 mph in a 35 mph zone coming off Interstate 70 and Providence Road without his emergency lights on.

The pursuit was initiated around 1:50 a.m. by Officer Jordan Payne. He tried to pull over a light-colored Volkswagen Beetle near Ninth and Cherry streets after the driver failed to use a turn signal and then ran a red light.

Holt did not pull over, and the officer quickly lost sight of the car after Holt drove into the Hitt Street parking garage.

Payne drove into the garage and then out on the east side. He caught sight of the Beetle again and noticed that a parked vehicle had been struck.

Again, Payne activated his lights and siren and tried to stop Holt, who was now speeding north on Ninth Street. His pursuit ended again at Ninth and Walnut Streets when the officer lost sight of the car once more.

Dashcam footage from the second officer shows the officer driving over 60 mph in a residential area in north-central Columbia without his emergency lights or siren activated. The officer, Matthew Wright, spotted the suspect’s car at about 1:56 a.m. on I-70. 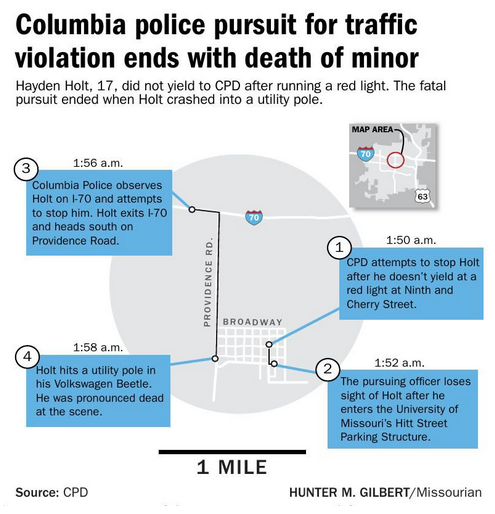 The officer began to chase him, but Holt got off I-70 on the Providence Road exit and began speeding south on Providence Road. At that point, Holt’s speed reached “triple digits,” said Sgt. Scott Alpers of the internal affairs unit. The officer reached at least 98 mph on I-70.

Just north of Locust Street, Holt’s car struck a utility pole. The 17-year-old was declared dead at the scene by a Boone County medical examiner.

Kari Hallowell, Holt’s mother, couldn’t be reached Monday to talk about the release of the police dashcam video.

But in an interview Dec. 6 with KOMU — the day her son died — Hallowell said her son was a regular kid who liked playing video games with friends. He “would eat, breathe, sleep football and he was good at it,” as his mother put it. He had aspirations to go to college and study information technology.

She described her son as “a loving young man who made a stupid mistake.”

That mistake was a misdemeanor. Under the previous department policy, officers were instructed to generally “not pursue violators for less than a violent felony.”

Under the new policy, officers have been given discretion to pursue suspects in nonviolent felonies.

When asked if he believed the new policy may have contributed to the increase in pursuits, he added that “it definitely played a role.”

When asked Monday whether Holt could have been let go and picked up later, Jones asked Alpers: “We didn’t know who he was, didn’t we?”

“Not for sure,” Alpers responded.

“That is something we will weigh when we look at the investigation,” Assistant Police Chief Jill Schlude said.

There’s a “common-sense balance between the need to apprehend and the risk to the public,” Bolinger said. “(Holt) is showing a risk to the public prior to us even activating our lights,” he said, referring to Holt’s traffic infractions.

“Whenever the pursuit becomes more dangerous than the suspect, you terminate the pursuit,” Bolinger said.

When asked if the department would change its policy after the fatal crash, Jones said, “I don’t change policy based on a single event. But we will continue to evaluate the policy.”