COLUMBIA - The City Council is voting tonight to confirm whether the city will allocate $2 million for the new I-70 bridge outside of Rocheport.

This plan will cost a total of $240 million. The majority of the funding will come through federal funds and MoDOT.

It will build a new 6 lane bridge to the south of the current structure, which will allow traffic to flow regularly during construction.

The other option would have been to repair the current bridge by shutting down two lanes of traffic at a time. This plan would have cost $18 million.

MoDOT estimated that shutting down parts of the bridge would potentially cause traffic delays of three to eight hours.

Columbia Chamber of Commerce President Matt McCormick says that this increase in traffic would impact the entire state.

"The Rocheport bridge is really the lynchpin that holds our two east and west boarders together on I-70. And so the importance of that bridge is not just felt here in Columbia or within this mid-Missouri area, but its felt boarder to boarder," McCormick said.

A study by MoDOT implies that the impact of the bridge goes beyond Missouri's borders. Truck traffic over the bridge hits 47 of the 48 states every 48 hours. 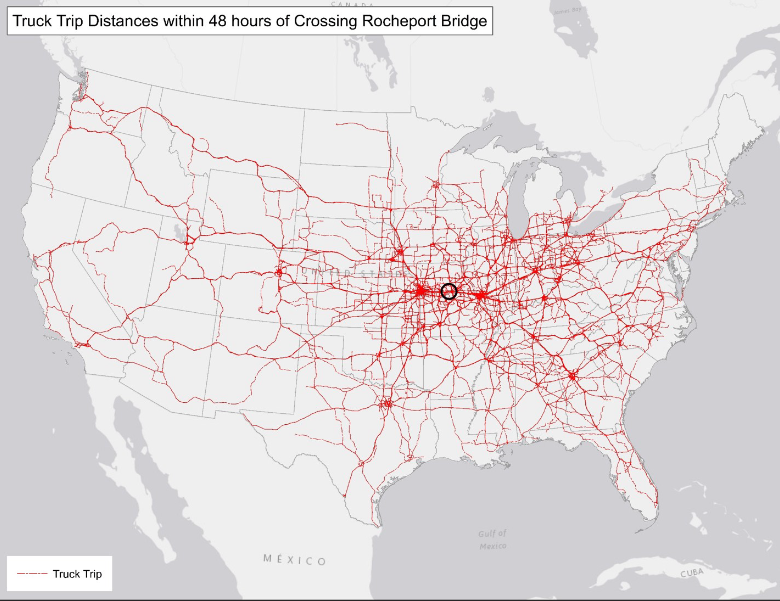 This adds up to $700 billion worth of freight traveling through Missouri using that bridge according to another study by MoDOT. Additionally, more than 1.1 million jobs nationwide depend on this highway.

Linda Keeney is a hairdresser at Studio 209 off of Business Loop 70.

She said that her clients have talked about the bridge project a lot in recent weeks. A large portion of her business travels from the other side of the river in order to reach her.

"30 to 40 percent (of my clients come from that side). If that vanished, that is a lot of business for me. Almost half of your business is gone." Keeney said.

The $2 million investment by the City of Columbia may seem like it doesn't make much impact.

McCormick said that Columbia is being asked to pitch in because of the way it helps with acquiring grant funding.

"When they go through the grant process, one of the things that makes us look more appealing to the federal government is to have local input and skin in the game, if you will, " McCormick said.