FULTON - A Fulton man says his 13-year-old son is a hero for saving his family from an intense fire Wednesday night.

Joe Gray said everyone was asleep when the fire started.

"I jumped up and ran for the kitchen. There was fire everywhere and I breathed it all in and I collapsed. There was nothing I could do," he said.

He said the next thing he knew he was outside the house.

Gray said it was his son Langdon who got two other children out of the house - a 3-year-old boy and a 2-year-old girl.

Gray walked through the house Thursday and said there's nothing left. He said he has the clothes on his back and a pair of socks he found behind a dresser.

"There’s no ceiling, it’s just roof, some wall structure and a big mess on the floor. The furniture’s gone, their toys are all gone, their diaper bag is burned up, her crib's burned up, it’s all gone. Just empty black insulation," Gray said.

The Fulton Fire Department determined unattended cooking materials caused the fire. Damages are estimated at $100,000. The house did have working smoke detectors and Gray said that's what alerted the family first.

The American Red Cross was able to put his wife and children in a hotel.

Gray said he didn't feel right leaving his house and, in an attempt to process everything, he stayed in a tent in the backyard Wednesday night. 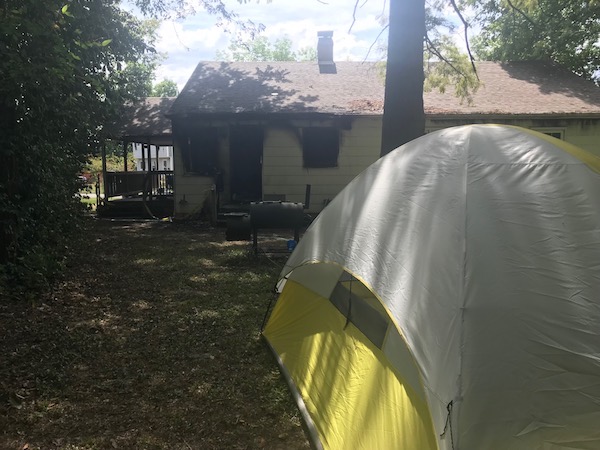 Gray said he's focused on getting his children the things they need before dealing with his own needs. His daughter lost more than anyone else.

Gray's siblings are helping the family move forward. Gray said he's normally "the helper," so it's odd to be on the other end, needing help.

A neighbor posted on a Fulton community Facebook page early Thursday morning and immediately had members reaching out to help start a donation drive for the Gray family.

A member of Gray's family posted these suggested items and sizes for clothing donation:

"Gift cards would be greatly appreciated, so the family can get other items that they need," said Megan Milam, another concerned community member.