COLUMBIA - With one picture, Lela Rice said her sexuality was stolen, her privacy was breached, and her consent was an after-thought.

She also said it was a picture she only found out about because a friend saw it first.

“I just got a text from a friend of mine that said, ‘Hey, do you follow this ‘MizzouSnaps’ account?” Rice said. “I don’t really know how Snapchat works, but somebody ran this account, anybody could send in Snapchat's of anything, and they would just upload them to the story for the public. It had a lot to do with the crazy party scene at MU, and that’s not really my cup of tea, so I didn’t know.”

Rice is referring to a Snapchat account that was commonly known as “Mizzou_Snaps.” The account had no affiliation with MU, but was popular with students in 2014. The last tweets from a Twitter account that advertises itself as the “official Twitter of Mizzou_Snaps” shows the most recent tweets to be from December 2014. Rice said her pictures were publicly displayed during that time.

“I had to add this person and go through their snap story and it’s just dozens of snaps,” Rice said. “I’m just going through all of these snaps, wondering what I’m supposed to be paying attention to, and then all of a sudden, there I am.”

“I was just baffled and mortified,” Rice said. “You were constantly making sure everything was okay, so why stop here?”

Rice said that disregarding her consent made her feel powerless.

“My sexuality is something that I can choose to share with anybody that I want to, but when they broadcast it on the internet, that’s something I don’t want to do,” Rice said.

Rice also said a combination of fear and public shame led her to not take any action or alert authorities.

“I’m just kind of a timid person when it comes to things like authority,” Rice said “It’s really hard not to be embarrassed about how we got here, how this situation even came to pass. It’s not something that I want to talk about over and over to cops and my parents. I think it’s an issue a lot of victims can face.”

Even if Rice did pursue legal action, her options would have been (and still are) limited. Law experts say some victims of non consensual pornography can rely on legislation like anti-cyberbullying laws.

“I don’t think people understand how common it is to share intimate photos, especially with younger people,” Lidsky said.

Several studies show how common sharing explicit photos is, specifically non-consensual. A study released last month by the Cyber Civil Rights Initiative shows that 12.8% of participants reported having had a sexually-explicit image of themselves shared without their consent or have been threatened with such actions.

Barnett says a lack of specific legislation against non consensual distribution of sexually-explicit images limits the actions a victim can take.

“Sometimes the conduct can be hard to get at with existing laws,” Barnett said. "If it’s a one time thing instead of a pattern of behavior, it’s much harder to show that it’s cyber harassment. So something specifically targeted at putting up non consensual pornographic photos on the Internet is a worthwhile endeavor.”

Some state legislators, such as Rep. Jim Neely, agree. He sponsored House Bill 705, which “creates the offense of non consensual dissemination of private sexual images.” The bill was first introduced this past January and is currently pending. 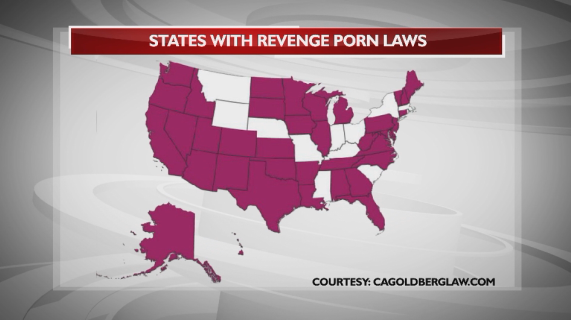 Rice said she hopes Missouri follows in the footsteps of states that have passed laws protecting other victims.

“It’s not okay to, I don’t know, take control of someone’s sexuality like that,” Rice said. “I absolutely think that it should be illegal.”