COLUMBIA - A Columbia Public School community service project that has students removing invasive honeysuckle is on hold after $700 worth of equipment was stolen.

The group said three men took the equipment. One reportedly had a red car, bald head, wearing camoflage shorts and a Chiefs jersey. No description was given of the other two men.

They stole 45 sets of pruning shears, two saws and some gloves.

A Facebook post from one of the teachers said, "the equipment was stolen right in front of a class he was working with today."

About 95 percent of the equipment was returned to police after being brought to a pawn shop.

CPS Grand Teton Trip posted again on their Facebook page after the materials were returned: 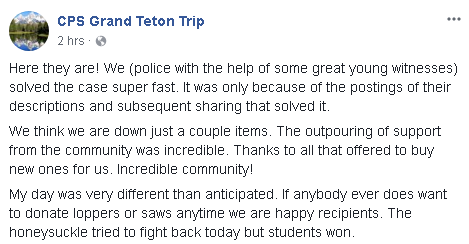 The investigation is ongoing. Columbia Police Department has not identified any suspects.

This story has been updated to include the latest information.