After receiving a tip from a prisoners' rights advocacy group, Justice 4 Inmates, KOMU 8 News looked into the case of former Moberly Correctional Center inmate, Tommy Fitzgerald, who died and then was revived while receiving medical treatment within the prison.

"It scared me that he would come home in a pine box, although he did not, he is what motived me to get change," Ferguson said.

The group, initially based in Kansas City, is made up of former Department of Corrections employees and loved ones of inmates currently in prison.

"Tommy wants to see things changed too, because going into full cardiac arrest, the possibility is always there that they can bring them back, or we lose them," Ferguson said.

Target 8 looked into medical documents to answer the questions of why and how it was possible Fitzgerald could have been given the wrong treatment.

Fitzgerald said he's had a history of grand mal seizures since receiving a gun-shot-wound to his head after escaping the Jackson County Jail in July of 1985.

He added that one night while in the Moberly Correctional Center, he was experiencing a severe headache and abnormal muscle functions on the left side of his body.

"My left side just wasn't working, it wouldn't go, and it never happened to me like that before," Fitzgerald said.

After being taken to the medical unit within the prison, Fitzgerald said this is where everything went wrong.

"I told them I had this head injury, and that I was shot, and they're looking at me like I'm crazy," he said. "They're asking me what kind of drugs that I took."

Fitzgerald said he explained to the medical unit he had not consumed drugs in over 19 years.

"They had the assumption that I was 'high as a kite'," he said.

According to his medical records, this statement was proven untrue. 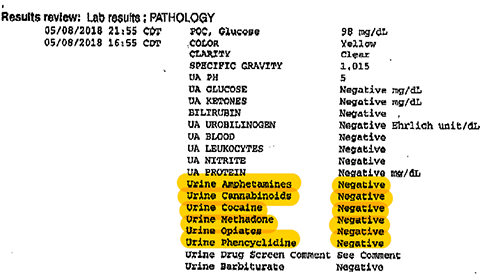 "They told me my blood pressure was sky high and off the charts," he said. "They thought I was on some kind of drugs and later found out that I wasn't."

According to the medical documents, Fitzgerald was given dosages of Clonadine and Narcan.

The Mayo Clinic website shows Clonadine is used for treating high blood pressure, and Narcan, according to a study on RXlist.com, can have severe side effects like high or low blood pressure, seizures and in the worst case death.

"You can't give Narcan to a seizure patient, it causes cardiac arrest," Fitzgerald said. "They did everything wrong, but they did revive so..."

The documents show that Fitzgerald's body started having jerking movements followed by cardiac arrest and then his heartbeat stopped.

KOMU 8 News tried contacting both the Missouri Department of Corrections and Corizon Health Care headquarters 6 times for information about this case, but never heard back.

Corizon Health Care supplies medical care for the Missouri Department of Corrections along with other states.

Fitzgerald said he received a call from the doctor involved who apologized.

"Somebody made a statement that they knew they messed up, and that they were going to use that experience as a training tool," he said.

KOMU 8 News received an email from Corizon Health Care explaining that the Missouri Department of Corrections is in charge of all medical documents and all documents are housed within the prison facility.

Former inmate Stacy Hunter's brother, Trevis Suftin, said he believes the prison system has been a problem for years, especially in his brother's medical case.

"Three years from the time he started complaining about it, before they finally gave him x-rays, the scans and everything he needed," Suftin said.

Hunter passed away from lung and throat cancer on October 19, 2019.

KOMU 8 News was scheduled to interview Hunter, but he cancelled because of severe health issues. He died two weeks later.