A truck went up and down Bluff Dale Drive installing signs that will restrict parking from 6 a.m. to 7 p.m. on Mondays through Fridays for 90 days.

Wendy Hofmann is one of the many people who gave their support of the project in last year's city council meetings.

"I don't like riding bicycles on the road and I feel that anything that gets people walking and riding bicycles instead of being in their cars is a good thing," Hofmann said.

The city council decided to go forward with the trail expansion last February which sparked a controversy in Columbia.

Sutu Forte is among a group of neighbors on Bluff Dale Drive who oppose the project. On Monday night, she climbed into a tree in the development path. She said Friday morning she won't come down until the city stops the construction work. 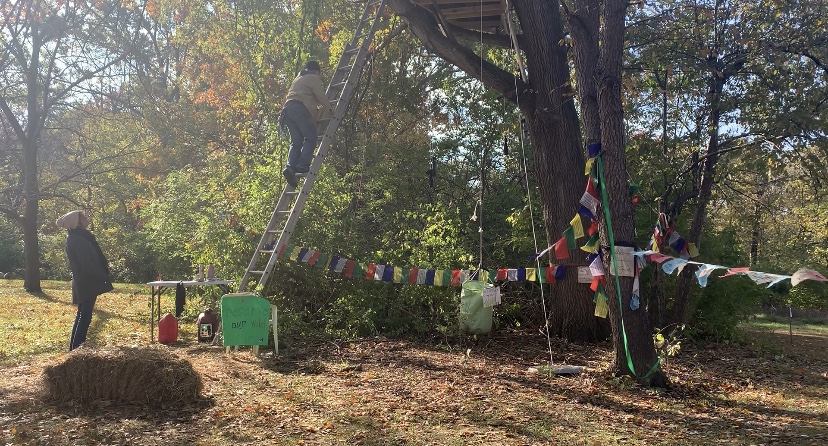 "This neighborhood is going to be so violated by all of this equipment, and then if it goes through, all of the traffic from east campus and the Missouri campus share access through our destroyed wilderness sanctuary," Forte said.

Trail developments are nothing new in Columbia. Hofmann said her friend was upset when construction began on her street years ago but now enjoys using the trail.

"Most people who have had experience of having a bike trail built near their house, if they've been opposed at first, they've changed their minds once the trail is in," Hofmann said.

Steven Sapp, Columbia's Director of Community Relations, is working with the Columbia Police Department to decide how to handle Forte's unwillingness to come down.

According to our partners at The Columbia Missourian, a judge issued an order to remove Forte from the tree. Friday evening Forte told our reporter she expects to get an eviction notice anytime between now and Nov. 8, forcing her to remove herself from the property.