UPDATE: Compensation for anyone with information on Melissa Peskey's murder case

JEFFERSON CITY - It's been nine months since Melissa Peskey's death, and the family together with the Missouri State Highway Patrol, hopes some reward money will help in the efforts to find out who murdered her.

With the help of the Missouri Highway Patrol, the Peskey family is giving $10,000 for information leading the arrest of person(s) responsible for her murder.

The Highway Patrol tweeted Friday morning about the reward. 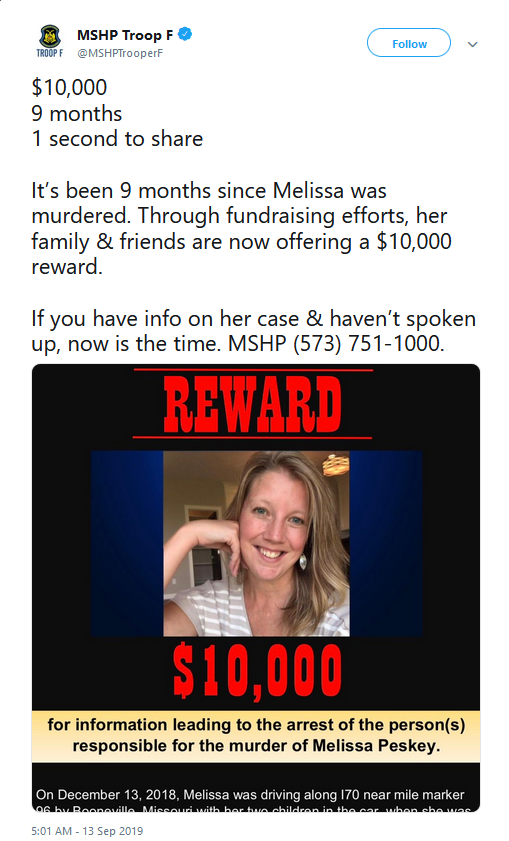 Melissa Peskey was shot and killed last December, while driving from her home in  South Dakota on I-70, right outside of Boonville. This led to a car crash.  Both of her children were in the car at the time but were not injured.  Sgt. Scott White said when the Highway Patrol got to the scene, they thought Peskey died because of an accident.

"This has not been an accident," Sgt. White said. "This was not an accidental shooting where someone was hunting and accidently shot across the interstate."

The reward money came from a fundraiser the family held. Peskey's sister Kara Renken says she knows someone has the answers the family needs.

"She wasn't alone on the road that night," Renken said. "Someone knows something."

"We're hoping that the $10,000 reward does help with that person that hasn't come forward yet and just to let them know that now is the time to come forward with that information," Sgt. White said.

UPDATE: Compensation for anyone with information on Melissa Peskey's murder case