FULTON - Two Fulton men have been given citations after a video showing them shooting a box turtle was posted to Facebook. The men later said they were killing the turtle for fishing bait.

The video was originally posted on Snapchat story. (Click on the thumbnail above to see a version edited to remove the most graphic elements.)

"You can save this turtle's life," one of the men jokingly said before shooting the turtle.

Alyedia Sullivan said she went to high school with the men. She posted the video on Facebook saying she hoped someone would know how to take legal action against them.

"This was the most stomach turning video I've watched in a while. To deliberately used an animal for target practice is DISGUSTING," she wrote.

Sullivan said, as an animal lover, she doesn't understand how people could be so cruel.

"I just don’t know how someone can look at an animal, want to pick it up and just shoot it," she said. "I don’t get the desire for that or why there would be entertainment out of that."

KOMU 8 News reached out to Isaiah Wolfe, who can be seen in the video. As of Tuesday night, he had not responded.

Sullivan said Wolfe did post this statement on his Snapchat story, claiming he shot the turtle to use for fishing bait. 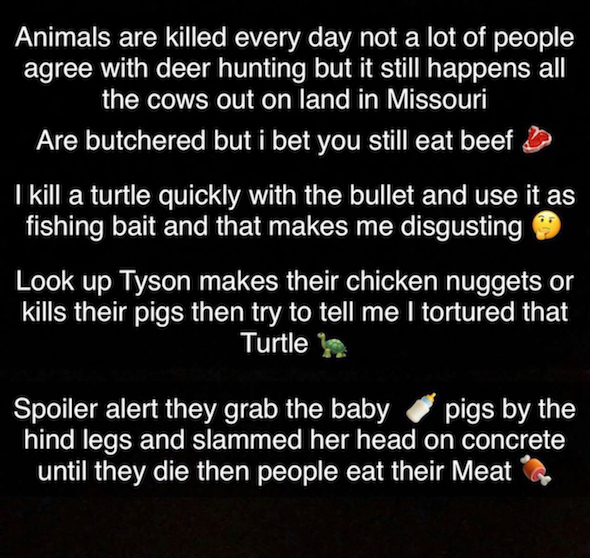 Sullivan said she doesn't believe the men were really using the turtle for fishing bait.

"The turtle was almost unrecognizable when it was finished, there was all that buckshot in it. That’s not fishing bait," she said.

Sullivan said she hopes the shooters learn their lesson.

"Box turtles are harmless," said Robert Hemmelgarn, media specialist at Missouri Department of Conservation. "Their main threat is from people, often times just being hit by vehicles in the road."

Hemmelgarn said the code determines what people can legally hunt, fish or gather in Missouri.

If someone did feel the need to harm a protected species, they would have to get specific approval from the director of the Missouri Department of Conservation.

"Wildlife code violations, depending on what it is, can range from a fine, a warning, to revocation of fishing permits and even prison time," Hemmelgarn said.

The two men in the video have not been charged, but according to Hemmelgarn, they have received citations and the case is "pending prosecutorial action".